Ronald S. Colburn, a retired Deputy Chief of the US Border Patrol, has some strong opinions about the looming amnesty and how it will affect the agents’ ability to do their job of protecting the nation.

RONALD COLBURN: I absolutely believe it will make the situation much much worse. I see the President is sprinting toward a precipice, ready to go off the cliff, except he has the American people tethered on a rope and taking us down with him.

First, do no harm. When it comes to comprehensive immigration reform, it’s better to have no reform than to have bad reform. I lived though the immigration reform and control act of ‘86; I saw the mistakes made then. In 2003, when I was assigned to the White House as the director for law enforcement I advised both the White House, the Bush administration and Congress, that it would be a bad idea to repeat what we experienced through the previous amnesty program. This should not be about amnesty, this places the Border Patrol agents at much greater danger and they probably have the most dangerous law enforcement job in America.

GRETCHEN CARLSON: You have seen some buses coming through. What do they say?

COLBURN: Amnestia. The placards that you see for destination for a Greyhound bus that say “destination New York City,” “destination Chicago” in Mexico it has been videotaped showing buses en route to the border area from central Mexico saying Amnestia — amnesty. So it’s a theoretical belief in entitlement that Central Americans, South Americans, those from the Caribbean, Eastern Europe and Asia believe that if they can get in, they will get a pass by this president, while those who obey the law and wait their turn to lawfully enter will be pushed aside for those illegals.

CARLSON: Do you now assume that people will be flying fast as they can to the border?

COLBURN: They already are. They’re on their way, I guarantee. I tell you right now, in speaking with Border Patrol agents in just the last couple of days, they are really preparing themselves for a huge influx of amnesty-intended beneficiaries…. This message potentially tonight could really open the valves.

So anyway, what is the job of the Border Patrol in the new post-amnesty era? Hand out milk and cookies to cartel thugs as they cross into the southwest? Rescue aliens who run out of water in the desert? 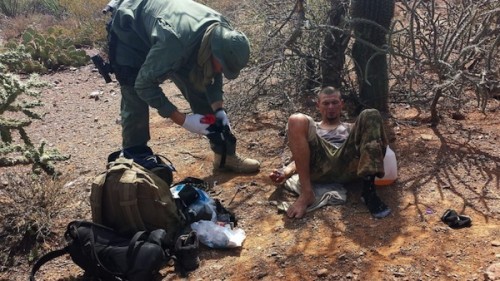 Will the Border Patrol be allowed to arrest invading foreigners at all? Not that they have been permitted to do much enforcement in the last while.