The current occupant of the White House is so consumed with his re-election campaign that he cannot let it rest even during an overseas trip that is supposed to be about expanding trade.

President Obama must believe that the word “Arizona” is a magic talisman that will enthrall Hispanic voters (legal and illegal) and make them forget his earlier unfulfilled promises of amnesty which was supposed to occur in the first year of his Presidency. He surely thinks that hopeful Hispanics will be sucker enough to vote for him despite his failure to deliver the big enchilada. It doesn’t seem like much of a re-election strategy, but it’s what he has. 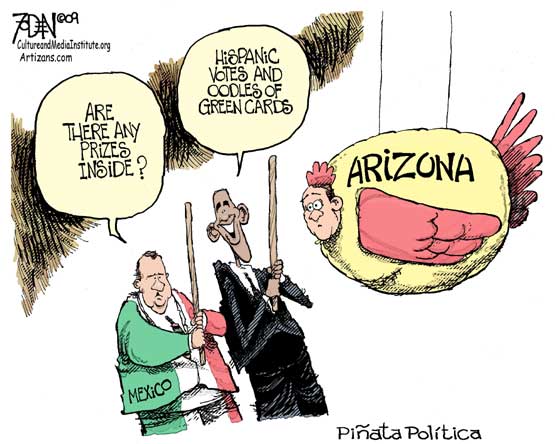 “We now have a Republican nominee who said that the Arizona laws are a model for the country … and these are laws that potentially would allow someone to be stopped and picked up and asked where their citizenship papers are based on an assumption,” Obama told Univision during an interview in Cartagena, where the president is attending the Summit of the Americas.

The three-day trip gives the president an opportunity to showcase his interest in the region and court Latino voters back home, whose support will be crucial in the upcoming election. Obama won a majority of the Latino vote in 2008 and his campaign is hoping for similar results come November.

“I can promise that I will try to do it in the first year of my second term. I want to try this year,” Obama told Univision.

During his 2008 campaign, then-candidate Obama promised to produce an immigration reform bill within a year of taking office. The problem now, the president told Univision, is resistance from Republicans.

“What we need is a change either of Congress or we need Republicans to change their mind, and I think this has to be an important debate during — throughout the country,” he said.