I’m not one who believes that Barack Hussein Obama is a secret Muslim, although I do believe he is unduly friendly toward Islam for someone who claims to be a Christian. More likely is that BHO is an arrogant globalist who sees the differences between Islam and less bloodthirsty religions as no big deal.

Like his predecessor in the White House, Obama has difficulty with naming Islam as Western Civilization’s millennial enemy. That presents a problem in leadership, namely the inability (or refusal) to focus the nation’s attention on the stubbornness of Islamic jihad that seeks to crush freedom and institute a worldwide sharia state.

Obama visiting Muslim shrine in India – no plans to visit Hindu, Buddhist, or other shrines

He is visiting, in other words, a Muslim shrine. He has no plans to visit any holy places of the Sikhs (such as the Golden Temple, Amritsar), or any Hindu holy places, Buddhist holy places, or Jain holy places. Nor does he plan to visit Nariman house, the Chabad house in Mumbai that was the chief target of the jihad mass-murderers who killed 173 people in November 2008.

Once again, Obama manifests a solicitude for Islam that he wouldn’t dream of extending to other faiths. 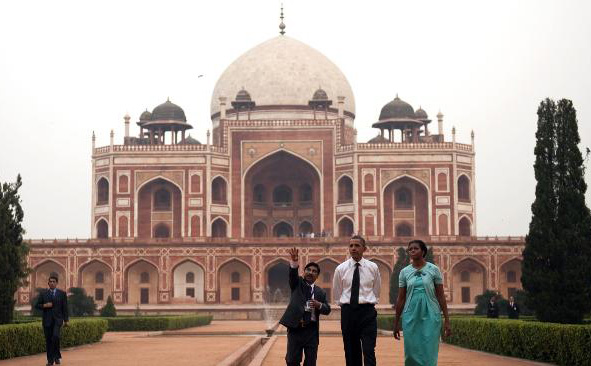 Did I mention that Obama has a fondness for the ”Religion of Peace”?

The US President’s former grade three teacher said that Mr Obama — who was known as ”Barry” when he attended the Menteng One school in Jakarta — studied the Koran and went to classes on Islam, despite the objections of Ann Dunham, a Catholic.

The teacher’s recollections will add to speculation about Mr Obama’s links to Islam during his much-anticipated visit to Indonesia, the world’s most populous Muslim nation, as part of his ten-day tour of Asia.

His middle name, Hussein, and the fact that his stepfather was a Muslim, have combined to perpetuate rumours about Mr Obama’s religious leanings. The number of Americans who think that he is a Muslim has grown since his inauguration to one in five.