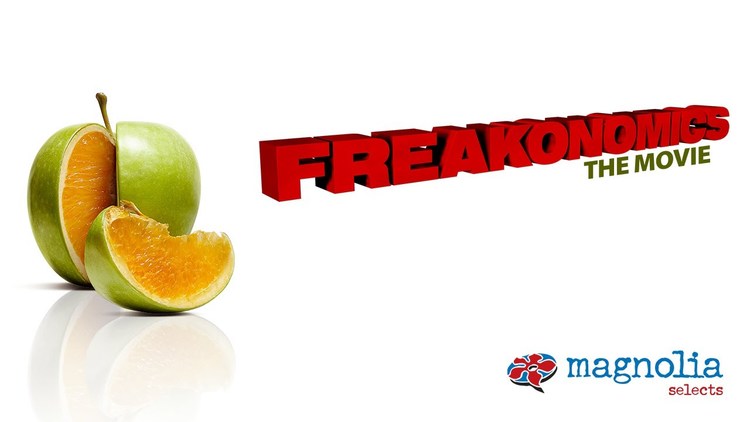 From my review in Taki's Magazine:

The new documentary Freakonomics harkens back to the good old days of 2005. Remember when economists, having permanently perfected the economy, graciously allowed their attention to wander to crime fighting, sumo wrestling, baby naming, and other fields not traditionally enlightened by their insights? University of Chicago economist Steven D. Levitt teamed up with journalist Stephen J. Dubner to compile one of the Housing Bubble era’s biggest airport-bookstore bestsellers: Freakonomics: A Rogue Economist Explains the Hidden Side of Everything. Levitt and Dubner have now recruited some prominent documentarians to anthologize five disparate chapters of Freakonomics.

The most entertaining is the segment by Morgan Spurlock (Super Size Me) on those not fully thought-through first names with which some African-Americans have saddled their babies ever since the late 1960s’ Black Pride movement. For example, scholars have counted 228 varietals of ”Unique,” including ”Uneek” (a fine name for a future rodent exterminator). ...

Are black children’s lives permanently damaged by all this parental originality? In 2005, Levitt and Dubner rather callously concluded that, in effect, if your parents named you ”M’qheal” rather than ”Michael,” your bigger problem is likely your last name. You are evidently descended from some mighty poor decision-makers.

Spurlock, however, adds a useful coda from another social scientist who mailed out r?©sum?©s under white and black first names that were otherwise identical. Job applications bearing Ghetto Fabulous monikers are more likely to go straight into Human Resources Departments’ circular files. So, African-American parents: For the sake of your kids’ careers, please resist your whimsical urges. (Somebody should study the impact of the science-fictiony first names that Mormons dream up, such as D’Loaf, Zanderalex, and ElVoid.)

In other pop-sociology movie news, check out VideoGum's 2009 article "Malcolm Gladwell's Blink Vying for Legendary Worst Movie of All Time Status," including an important update on who is now attached to star in Blink. (Try to guess!)