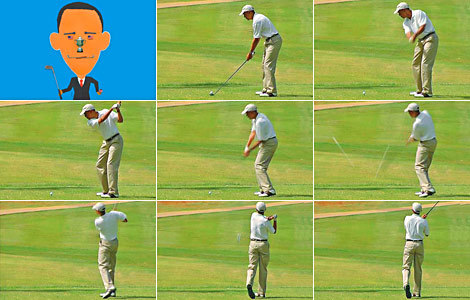 As early as 2007, one poll indicated, Obama was seen as ”strongly religious’’ by more voters than every presidential candidate except Republican Mitt Romney, whose Mormonism was the subject of intense news coverage.

Obama’s courtship of religious groups in the 2008 race - the most extensive ever by a Democratic candidate for president - paid off on Election Day with strong support among liberal and moderate religious voters. He won 54 percent of the Catholic vote, a stark reversal from four years earlier, when Senator John F. Kerry of Massachusetts, himself Catholic, lost the same group to Bush. ...

He named a best-selling book after a pastor’s sermon and was outspoken as a candidate about the value of faith in public life. He infused stump speeches with phrases like ”I am my brother’s keeper,’’ and made his journey to Christianity a central theme of the life story he shared with voters.

But since President Obama took office a year ago, his faith has largely receded from public view. He has attended church in the capital only four times, and worshiped half a dozen times at a secluded Camp David chapel. He prays privately, reads a ”daily devotional’’ that aides send to his BlackBerry, and talks to pastors by phone, but seldom frames policies in spiritual terms.

The greater privacy reflects not a slackening of devotion, but a desire to shield his spirituality from the maw of politics and strike an inclusive tone at a time of competing national priorities and continuing partisan division, according to people close to the White House on faith issues.

”There are several ways that he is continuing to grow in his faith, all of them - or practically of all them - he’s trying to keep as private and personal as possible so they will not be politicized,’’ said Pastor Joel C. Hunter, who is part of an inner circle of pastors the president consults by phone for spiritual guidance.

On the other, Barack Obama's golf game has grown dramatically more public once he reached his life's goal.

Look, wouldn't the simplest explanation be that Obama was just yanking our chains about the Jesus stuff? That, as he admitted he was told in 1985, he'd need to join a church in Chicago if he expected to have a political career on the South Side. So he picked out the most radically leftist upscale one available? That he gave $53,770 to Rev. Wright's Church in 2005-2007 in gratitude for helping him establish his blackness? As Alison Samuels reported in Newsweek on why Oprah quit Wright's Church in the 1990s but Obama would not:

"Friends of Sen. Barack Obama, whose relationship with Wright has rocked his bid for the White House, insist that it would be unfair to compare Winfrey’s decision to leave Trinity United with his own decision to stay. ”[His] reasons for attending Trinity were totally different,” said one campaign adviser, who declined to be named discussing the Illinois senator’s sentiments. ”Early on, he was in search of his identity as an African-American and, more importantly, as an African-American man. Reverend Wright and other male members of the church were instrumental in helping him understand the black experience in America. Winfrey wasn’t going for that. She’s secure in her blackness, so that didn’t have a hold on her.”