Obama Allows Mexican Police to Launch Operations from US

This item is definitely for the “What could possibly go wrong?” file. The idea is crazy and dangerous.

First, it is suspicious that this news was released on a Friday in late August, which makes it look like the Obama administration hopes it will pass unnoticed.

The White House spin is that the extreme violation of sovereignty is justified because it will help out America’s friends the Mexicans (which they most certainly are NOT). Mexicans despise America and only want to rip us off.

Plus, who counts to make sure all the Mexicans leave when the operation is over?

And who keeps the violent cartel criminals out of the United States? They already enter at will and control large areas of southern Arizona to run their drug shipments. Will Obama send additional Border Patrol agents to protect Mexican police when he has not acted similarly to defend Americans?

Below, Mexican police are the men wearing masks in this drug lord arrest photo. Mexico is so lawless that being a cop is indeed dangerous — but that’s not America’s problem. 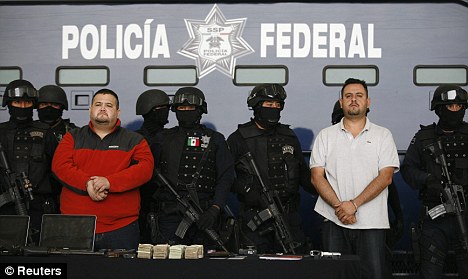 Mexican police (or criminals dressed like police) have already made hundreds of incursions into this country. They shouldn’t be made to feel even more relaxed about American sovereignty than the average Mexican already does. Training foreign policemen to violate our border as a normal procedure does not send the message that Americans still value the perimeter that denotes our nation.

WASHINGTON — The Obama administration has expanded its role in Mexico’s fight against organized crime by allowing the Mexican police to stage cross-border drug raids from inside the United States, according to senior administration and military officials.

Mexican commandos have discreetly traveled to the United States, assembled at designated areas and dispatched helicopter missions back across the border aimed at suspected drug traffickers. The Drug Enforcement Administration provides logistical support on the American side of the border, officials said, arranging staging areas and sharing intelligence that helps guide Mexico’s decisions about targets and tactics.

Officials said these so-called boomerang operations were intended to evade the surveillance — and corrupting influences — of the criminal organizations that closely monitor the movements of security forces inside Mexico. And they said the efforts were meant to provide settings with tight security for American and Mexican law enforcement officers to collaborate in their pursuit of criminals who operate on both sides of the border.

Although the operations remain rare, they are part of a broadening American campaign aimed at blunting the power of Mexican cartels that have built criminal networks spanning the world and have started a wave of violence in Mexico that has left more than 35,000 people dead.

Many aspects of the campaign remain secret, because of legal and political sensitivities. But in recent months, details have begun to emerge, revealing efforts that would have been unthinkable five years ago. Mexico’s president, Felipe Calderón, who was elected in 2006, has broken with his country’s historic suspicion of the United States and has enlisted Washington’s help in defeating the cartels, a central priority for his government.

American Predator and Global Hawk drones now fly deep over Mexico to capture video of drug production facilities and smuggling routes. Manned American aircraft fly over Mexican targets to eavesdrop on cellphone communications. And the D.E.A. has set up an intelligence outpost — staffed by Central Intelligence Agency operatives and retired American military personnel — on a Mexican military base.

“There has always been a willingness and desire on the part of the United States to play more of a role in Mexico’s efforts,” said Eric L. Olson, an expert on Mexico at the Woodrow Wilson Center. “But there have been some groundbreaking developments on the Mexican side where we’re seeing officials who are willing to take some risks, even political risks, by working closely with the United States to carry out very sensitive missions.”

Still, the cooperation remains a source of political tensions, especially in Mexico where the political classes have been leery of the United States dating from the Mexican-American War of 1846. Recent disclosures about the expanding United States’ role in the country’s main national security efforts have set off a storm of angry assertions that Mr. Calderón has put his own political interests ahead of Mexican sovereignty. Mr. Calderón’s political party faces an election next year that is viewed in part as a referendum on his decision to roll out this campaign against drug traffickers.

Deputy Secretary of State William J. Burns walked into that storm during a visit to Mexico this month and strongly defended the partnership the two governments had developed.

“I’ll simply repeat that there are clear limits to our role,” Mr. Burns said. “Our role is not to conduct operations. It is not to engage in law enforcement activities. That is the role of the Mexican authorities. And that’s the way it should be.”

Officials said Mexico and the United States began discussing the possibility of cross-border missions two years ago, when Mexico’s crime wave hit the important industrial corridor between Monterrey and Nuevo Laredo. To avoid being detected, the Mexican police traveled to the United States in plain clothes on commercial flights, two military officials said. Later the officers were transported back to Mexico on Mexican aircraft, which dropped the agents at or near their targets.

“The cartels don’t expect Mexican police coming from the U.S.,” said one senior military official. None of the officials interviewed about the boomerang operations would speak publicly about them, and refused to provide details about where they were conducted or what criminal organizations had been singled out.

They said that the operations had been carried out only a couple of times in the last 18 months, and that they had not resulted in any significant arrests.

The officials insisted that the Pentagon is not involved in the cross-border operations, and that no Americans take part in drug raids on Mexican territory.

“These are not joint operations,” said one senior administration official. “They are self-contained Mexican operations where staging areas were provided by the United States.”

Former American law enforcement officials who were once posted in Mexico described the boomerang operations as a new take on an old strategy that was briefly used in the late 1990s, when the D.E.A. helped Mexico crack down on the Tijuana Cartel.

To avoid the risks of the cartel being tipped off to police movements by lookouts or police officials themselves, the former officers said, the D.E.A. arranged for specially vetted Mexican police to stage operations out of Camp Pendleton in San Diego. The Mexican officers were not given the names of the targets of their operations until they were securely sequestered on the base. And they were not given the logistical details of the mission until shortly before it was under way.

“They were a kind of rapid-reaction force,” said one former senior D.E.A. official. “It was an effective strategy at the time.”

Another former D.E.A. official said that the older operations resulted in the arrests of a handful of midlevel cartel leaders. But, he said, it was ended in 2000 when cartel leaders struck back by kidnapping, torturing and killing a counternarcotics official in the Mexican attorney general’s office, along with two fellow drug agents.

In recent months, Mexico agreed to post a team of D.E.A. agents, C.I.A. operatives and retired American military officials on a Mexican military base to help conduct intelligence operations, bolstering the work of a similar “fusion cell” already in Mexico City.

Meanwhile the Pentagon is steadily overhauling the parts of the military responsible for the drug fight, paying particular attention to some lessons of nearly a decade of counterterrorism operations in Afghanistan and Iraq. At Northern Command — the military’s Colorado Springs headquarters responsible for North American operations — several top officers with years of experience in fighting Al Qaeda and affiliated groups are poring over intelligence about Mexican drug networks.

One officer said, “The military is trying to take what it did in Afghanistan and do the same in Mexico.”

That’s exactly what some Mexicans are afraid of, said a Mexican political scientist, Denise Dresser, who is an expert on that country’s relations with the United States.

“I’m not necessarily opposed to greater American involvement,” Ms. Dresser said. “But if that’s the way the Mexican government wants to go, it needs to come clean about it. Just look at what we learned from Iraq. Secrecy led to malfeasance. It led to corrupt contracting. It led to torture. It led to instability. And who knows when those problems will be resolved.”