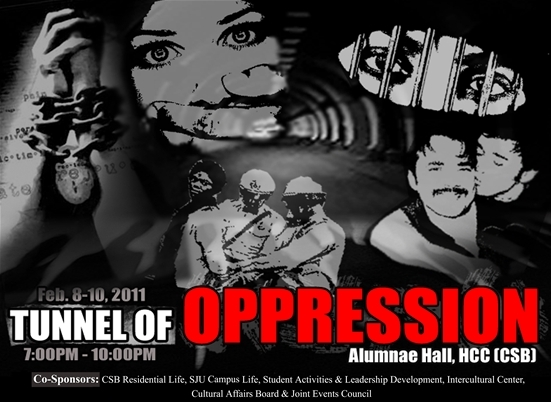 It’s a crime what many universities do to impressionable young minds. Freshmen students go in expecting an advanced education with intellectual stimulation arising from the debate of great ideas. Instead they undergo liberal reprogramming that would make Pol Pot proud.

For some reason, cultural Marxists are crazy for white guilt. Apparently worship of the great god Diversity cannot be accomplished without debasing whites, and particularly white males. Perhaps the low self-esteem of professors translates into a psychological need to see students appropriately groveling at their Marxist analysis of seeing oppression everywhere.

Other oppressions du jour include sexism, racism and Islamophobia. All the better to identify approved victims.

One curious expression of the brainwashing that substitutes for education is the Tunnel of Oppression at DePauw University, a sort of interactive event that was analyzed recently in the New York Post (see below).

Googling around turned up a number of Tunnels of Oppression (e.g. one in 2007 in Nevada), so the ritual of sacrificing critical thinking to liberal ideology has a history. At least it gives freshmen an idea of what what they face. 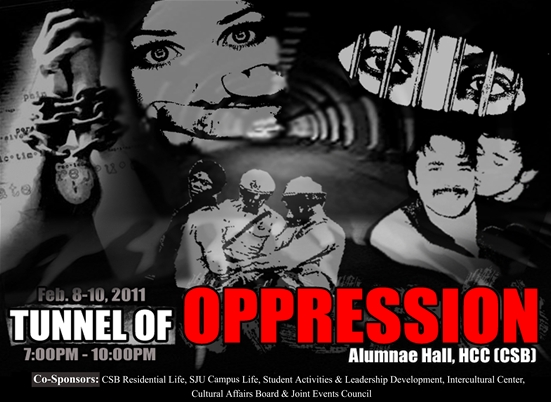 In other diversity news, the President has created a new bureaucracy to emphasize the importance of the post-American value: Obama Creates Office Of Diversity, Inclusion (from Judicial Watch).

Parents sending children off to college for the first time, beware: Their “freshman orientation” is all too likely to include being herded through a “tunnel of oppression” to learn about the evils of “white privilege,” being lectured about how they’re part of a “rape culture” or being forced to discuss their sexual identities with complete strangers — before they even meet their first professor.

That’s right: For all we hear about faculty ideological or political bias, campus administrators are often worse when it comes to brainwashing students.

Consider the shocking account from a student trained to be a dorm supervisor — a resident adviser, or RA — at DePauw University in Indiana. One of her first duties last fall was to lead her new students through a house decorated as a “Tunnel of Oppression,” where supposedly “realistic” demonstrations in each room taught lessons such as how religious parents hate their gay children, Muslims would find no friends on a predominantly non-Muslim campus and overweight women suffer from eating disorders.

Indeed, in her training to become an RA, “We were told that ‘human’ was not a suitable identity, but that instead we were first ‘black,’ ‘white,’ or ‘Asian’; ‘male’ or ‘female’; … ‘heterosexual’ or ‘queer.’ We were forced to act like bigots and spout off stereotypes while being told that that was what we were really thinking deep down.” Dr. Martin Luther King Jr. must be spinning in his grave.

Unsurprisingly, she turned down the school’s offer to be an RA this year — she’d rather find another job.

DePauw is no rare case. At least 96 colleges across the country have run similar “tunnel of oppression” programs in the last few years.

Perhaps the most infamous re-education program was the University of Delaware’s: Every single student in the dorms endured an Orwellian “treatment” (the school’s word) program to expunge supposedly incorrect beliefs. Delaware demanded that its RAs ask intrusive questions about students’ sexual identity and write reports about their responses while lecturing students on environmentalism and telling them that “citizenship” required them to recognize that “systemic oppression exists in our society.”

The “treatment” was shut down a few years back after a faculty whistle-blower turned materials for the program over to the Foundation for Individual Rights in Education (where I now work), which publicized the outrage. But a series of “Residential Curriculum Institutes” started by those in charge of the Delaware program continues to this day.

And the same spirit infects much of American higher education. In New York, Hamilton College last fall ordered all first-year men to attend a “She Fears You” presentation, designed to get them to acknowledge their personal complicity (after just a month on campus!) in Hamilton’s “rape culture” and to change their “rape-supportive” beliefs and attitudes. Not coincidentally, the program’s presenter is a speaker at this year’s Residential Curriculum Institute.

Did Hamilton warn incoming female students of the campus “rape culture” before it took their tuition? I doubt it. But publicity did force administrators to make the seminar optional — just minutes before it started.

How many other schools host similar events that no one off campus ever hears about?

How to fight this indoctrination? First, warn your children or grandchildren about it — and remind them that every public college (and most private colleges) must leave students free to make up their own minds on such controversial ideas as “all white people are racists” or “all men are responsible for rape.” College is supposed to teach you how to think, not what you must think.

And, for the many students who do go through a creepy orientation program, please save any documents you’re given on the program and tell us about it at FIRE (thefire.org).

Justice Louis Brandeis famously opined that sunlight is the best disinfectant. If students go into orientation with their eyes open and a willingness to alert outsiders, we can hope to purge the infection of thought reform on America’s campuses.

Robert Shibley is senior vice president at the Foundation for Individual Rights in Education.