Mexico continues to collapse into a failed state, as shown by el Presidente Fox's long overdue insertion of troops into Oaxaca, which has been revolting for five months.

Parts of Mexico are turning into Colombia before our eyes, as more and more territory is being run by narco gangs, not Mexico City.

The unrest in Oaxaca began with a teachers' strike and has nothing to do with the encroaching narco-state, yet shows how local leftists can become emboldened when they see the central government unwilling or unable to exert its authority.

Even though Fox's earlier attempt to restore order in Nuevo Laredo with the military failed miserably, the chaos in Oaxaca apparently can no longer be ignored [Fox orders federal forces to Mexico's Oaxaca crisis, Reuters 10/27/06].

Mexican President Vicente Fox ordered federal forces to be sent to the conflict-torn city of Oaxaca on Saturday, after gunmen shot dead three people including a U.S. journalist. [...]

Nine people, mostly protesters, have been killed in a conflict that began in Oaxaca five months ago, when striking teachers and leftist activists occupied much of the colonial city, storming Congress and blocking hundreds of streets in an effort to oust state Gov. Ulises Ruiz.

Blogger Mark in Mexico reports that local revolutionaries stole the clothes of the American journalist after he was shot and lay bleeding to death on the street. Nice people, these Marxicans. 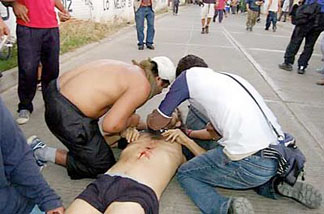