O'Sullivan On Brookhiser And Buckley 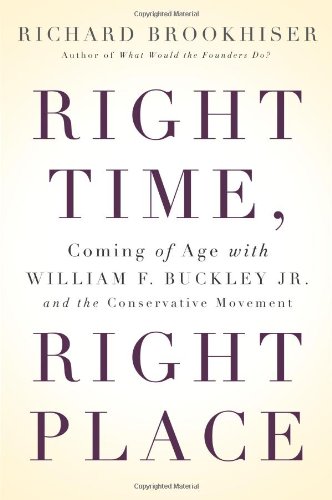 John O'Sullivan has a review of Richard Brookhiser's Right Time, Right Place: Coming of Age with William F. Buckley Jr. and the Conservative Movement in the latest National Review, (dead tree version) in which he reveals a couple of interesting things, one of which is that WFB did to Brookhiser the same thing he later did to O'Sullivan. When Brookhiser was 23, in 1978, "just as he was preparing to leave NR for law school, Rick was taken out for lunch to a high place (a.k.a. Paone's Restaurant on 34th Street), shown the kingdoms of the world, and offered the editorship of NR and all the stock of the magazine on Bill's eventual retirement. Meanwhile, he would immediately become a senior editor and later the managing editor." [You can listen to Brookhiser read from his book here.]

Few people could resist this kind of temptation, and Brookhiser never did go to law school, which probably made him a much happier person, however much it may have cost him financially. But...O'Sullivan writes

Out of the blue, one day in 1987, Rick received a letter from Bill that began discouragingly: "It is by now plain to me that you are not suited to serve as editor-in-chief of NR after my retirement." It did not get less discouraging. Bill made it clear that his decision was based on Rick's alleged lack of executive ability, that his true gifts lay in the writing of books, and that the decision was irrevocable. Such candor would be hard to take in a love letter. It was impossible to take in a notice of dismissal. Rick was hurt, angry, and upset on several grounds: the shock, the withdrawal of Bill's confidence, what he felt was the cheese-paring "peonage" of the financial settlement Bill offered, and much else. But the deepest wound was his insight that this was a breach between two mental states: his own substitute-father fixation and what he now intuited as Bill's narcissistic projection.

He summarizes Bill's letter in a parody of Bill's style: "It is now plain to me that the evidence of your name is indicative of a larger truth. You are not, in fact, me." Ouch! as the saying goes, but Rick's fist hurt too.

Reader, I was the innocent beneficiary of this psychological Armageddon...[How It Was, John O'Sullivan, June 22, 2009 [Subscriber link]

O'Sullivan was brought in to edit the magazine and he had the advantage of not being blinded by hero-worship:

Above all, I liked and admired WFB from Day One, but I did not hero-worship him. I had already used up my reserves of hero-worship on Colin Welch and Peter Utley, when I worked with them on the Daily Telegraph. So I had a rough idea of what to do when I arrived at NR and no (relevant) psychological hang-ups about doing it. That gave me a great advantage over an NR "lifer" like Rick.

But if you're working for someone who's subject to "narcissistic projection" you're always on the edge of the volcano:

I went on to enjoy nine very happy and productive years at NR until, eventually, I too came home to find an unexpected letter from Bill. But that is another story.

Which is interesting, since in discussions of this era, O'Sullivan has frequently seemed to minimize the "firing" aspect of it. And the review contains this fascinating tidbit:

Still, I have one serious complaint. On page 206 Rick delivers a judgment that generously flatters my literary tastes but gravely mistakes my moral character. I probably won't sue.

I couldn't wait to get the book to find out what this was, so I went Amazon's search inside feature:

Brookhiser: The only public clue John ever gave of his fate was in the valedictory letter he published in the last issue he edited, addressed to Bill (it ran in Notes & Asides). He recited what he had done, and maintained the cover story with aplomb—except that he illustrated the pleasure he had taken from his years at National Review with a line of poetry: "It was roses, roses all the way." This is the first line of The Patriot by Robert Browning and describes the rapture that greeted the patriot (when he first took power. But by the time he utters the poem, he has lost popular favour: "They fling, whoever has a mind, / Stones at me for this year's misdeed." Indeed, the patriot is about to be executed. John was too well read never to have read the whole poem, not malicious enough to have consciously planted the reference.

As I say, fascinating. The way in which Brookhiser " gravely mistakes" O'Sullivan's   moral character is left as an exercise for the reader.