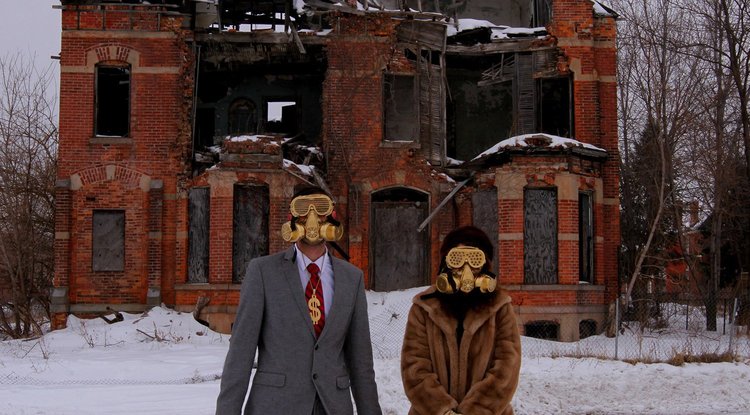 O'Hehir: Detroit And New Orleans Punished For Being Black

Salon's movie critic Andrew O'Hehir is one of the more interesting liberal writers around because he notices things: e.g., he was practically the only mainstream film critic to be unsettled by Neill Blomkamp's District 9. O'Hehir is just about the only conventionally liberal film critic who is aware that many top filmmakers aren't conventional liberals. Of course, O'Herir doesn't have anything more intelligent to offer in response than the conventional wisdom of 1975, but he's at least not immune to pattern recognition.

Why the right hates Detroit

Two great American cities have now faced near-death experiences in the 21st century. While Detroit’s gradual slide into bankruptcy and the almost biblical inundation of New Orleans in 2005 look quite different on the surface, I’m more struck by the similarities. ... Then there’s the obvious but uncomfortable fact that both are cities with large black majorities, in a country where African-Americans are only about 13 percent of the population.

But Detroit and New Orleans are not just cities where lots of black people happen to live. They are uniquely important and symbolic centers of African-American culture in particular and American culture in general, whose influence spread into every luxury high-rise, every suburban street and every farmhouse in the country. Both cities have been rigidly resegregated now, but at their cultural height both were places of tremendous fusion and ferment. Jazz was born from the children and grandchildren of kidnapped Africans learning to play European instruments for the dance parties of biracial French-speaking aristocrats; Berry Gordy’s great Motown recordings borrowed the Detroit Symphony’s string section to create what he called “the Sound of Young America,” driving white teenagers to shake a tail feather at sock hops across the land. ...

Is it pure coincidence that these two landmark cities, known around the world as fountainheads of the most vibrant and creative aspects of American culture, have become our two direst examples of urban failure and collapse? If so, it’s an awfully strange one.

Why? Why is it "awfully strange" that a local talent for party music correlates with a local lack of skill at administration? Shouldn't even movie reviewers have been introduced to the concept of cultural tradeoffs via Orson Welles' speech in The Third Man about how Switzerland had more civic virtues but fewer artistic accomplishments than Borgia Italy?

As I wrote during Hurricane Katrina:

No, the perfect storm was actually the combination of social and governmental incompetence at local, state, and federal levels—and unmentionable racial reality.

The ineptitude displayed by the Louisiana state government is also unsurprising. The state is unique in having a Latin political tradition, ... a culture in which the Argentinean demagogue Juan Peron would have felt at home.

The unofficial state motto is "Laissez les bons temps rouler" or "Let the good times roll." Compare that to New Hampshire's official motto of "Live free or die," which display a rather different understanding of freedom. Louisiana's reigning philosophy is freedom from responsibility.

It's a general rule that the tastier the indigenous cuisine, the lousier the government. Its culture has provided America with jazz, A Street Car Named Desire, and the great American comic novel of the 20th Century, A Confederacy of Dunces. New Orleans is a nice place to visit. But you wouldn't want to raise your kids there.

All this is now common parlance, more or less. What you won't hear, except from me, is that "Let the good times roll" is an especially risky message for African-Americans. The plain fact is that they tend to possess poorer native judgment than members of better-educated groups. Thus they need stricter moral guidance from society.

Black-run polities aren't doomed to failure, but they tend to have a smaller margin for error. Out of about 40 black African countries, Botswana, for example, has been ruled fairly well since independence, with some others improving over time. Others, not so much.

New Orleans itself is two-thirds black. It has had nothing but black mayors since 1978. All four of them are from the light-skinned "creole of color" elite, including the notorious Marc H. Morial, now head of the National Urban League. The city government is corrupt and lackadaisical. While the police department has perhaps rebounded from the depths it reached a decade ago when an officer was condemned to death for having a mother of three rubbed out by drug gangstas in his employ, nobody should be surprised that last week numerous officers ran away, and some even freelanced as looters.

In a racially diverse democracy like New Orleans, voting for good government takes a backseat to voting for your tribe's representatives in the eternal ethnic tussle over slices of the pie.

I’m tempted to propose a conspiracy theory: As centers of African-American cultural and political power and engines of a worldwide multiracial pop culture that was egalitarian, hedonistic and anti-authoritarian, these cities posed a psychic threat to the most reactionary and racist strains in American life. I mean the strain represented by Tom Buchanan in “The Great Gatsby” (imagine what he’d have to say about New Orleans jazz)

Oh, boy, Tom Buchanan again. Someday, I'm going to have to explain the racial emotions besetting F. Scott Fitzgerald. They are more complicated than many people today are capable of noticing.

or by the slightly more coded racism of Sean Hannity today. As payback for the worldwide revolution symbolized by hot jazz, Smokey Robinson dancin’ to keep from cryin’ and Eminem trading verses with Rihanna, New Orleans and Detroit had to be punished. Specifically, they had to be isolated, impoverished and almost literally destroyed, so they could be held up as examples of what happens when black people are allowed to govern themselves.

Hang on, you can stop composing that all-caps comment – I don’t actually believe that what happened to Detroit and New Orleans resulted from anyone’s conscious plan. Real history is much more complicated than that. I do, however, think that narrative has some validity on a psychological level, and that some right-wingers in America are so delusional, so short-sighted and, frankly, so unpatriotic and culturally backward that they were delighted to see those cities fail and did everything possible to help them along. ...

In the wake of both Hurricane Katrina and the Detroit bankruptcy, many mainstream commentators have tried, with varying degrees of subtlety, to frame these events as “black stories,” and specifically as stories of black dysfunction and black political failure. I’m willing to bet that many white Americans still believe those hysterical early post-Katrina stories about New Orleans residents shooting at aid helicopters (all were later retracted or exposed as false), or believe there was widespread rape and murder among the 20,000 refugees in the Louisiana Superdome. (There were no homicides and only one reported sexual assault, an attempted rape.)

No, that's just part of the usual cover-up after a big riot. See this December 21, 2005 NPR story on how three months later, the authorities still didn't want to know how many rapes were committed during Katrina.

Mediawise, what happened in New Orleans was that the first day or two of the disaster were covered primarily by local TV news. Local TV has an "if it bleeds, it leads" mindset, so they put all sorts of horrifying news on the air for the national audience. After the early going, however, the Washington and New York bigfoot TV correspondents descended with an agenda of scrubbing the local story of chaos and recasting it instead as the event that would bring down George W. Bush (a not wholly undeserving villain, of course).

While the Detroit situation is normally described as a failure of tax-and-spend, pro-union liberal policies, the racial coding you’ll find on Fox News and elsewhere is crystal clear – and the reader comments on any Detroit-related article, on Salon as elsewhere, will curl your hair with overt racial hatred. ...

But the long, hot summer of 2013 – the summer of Paula Deen’s Aunt Jemima costumes and the upside-down O.J. verdict of the George Zimmerman case and the barely concealed conservative jubilation at Detroit’s demise – has reminded us that America’s ugly old-school racial narratives die hard, if they die at all.

It's almost as if those old patterns still keep recurring.