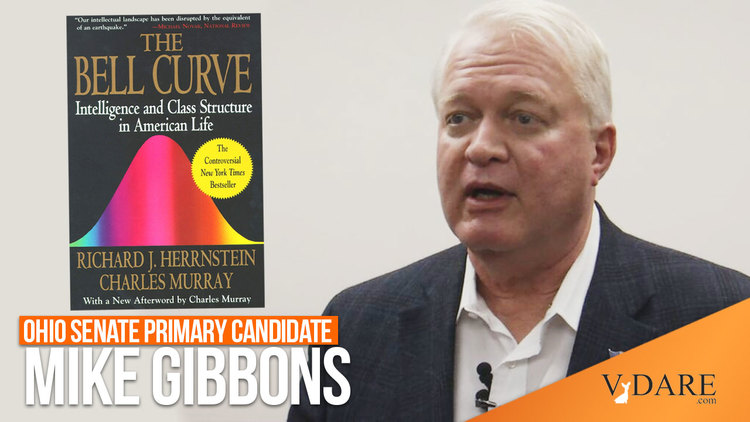 Earlier(2014) : Charles Murray on the 20th Anniversary of "The Bell Curve"

Mike Gibbons, a leading contender to succeed Senator Rob Portman, made the comments in a 2013 podcast on doing business in China.

The leading Republican candidate in the Ohio Senate primary employed offensive stereotypes about Asian people in a 2013 podcast, citing a widely discredited book, “The Bell Curve,” that has drawn allegations of racism and sloppy research.

The Senate candidate, Mike Gibbons, a financier who has poured millions of dollars of his own money into his campaign, made the comments during a discussion of how to do business in China. The remarks, published here for the first time, come as Republican candidates grapple with how to address a topic that has inflamed their voters, many of whom blame Beijing for a coronavirus pandemic that Donald Trump has referred to as the “Chinese virus.”

And though Gibbons hasn’t used that terminology, his decade-old comments on China and Asian people could draw fresh scrutiny to a candidate who has received little national media attention despite running in one of the marquee races in this year’s midterm elections.

“I’ve often thought that when I’ve run into Asians they’re all — you know, if you’ve ever read ‘The Bell Curve,’ it’s a book, a very controversial book, I can’t even remember who wrote, I think his name is Murray wrote this book,” Gibbons said in the Nov. 3, 2013, podcast, according to a transcript of his comments reviewed by The New York Times. He was referring to Charles Murray, a co-author of the 1994 book.

Gibbons continued: “And it said that the smartest people in the world as far as measurable I.Q. were Ashkenazi Jews. And then right below them was basically everybody in China, India and, you know, throughout the Asian countries.”

Clearly, the GOP candidate is a White Supremacist.

About a minute later, Gibbons, who earned a master’s degree from the Weatherhead School of Management at Case Western Reserve University, described being in a class with “mostly Asians” during graduate school.

“It was astounding to me how much they studied, how they were incredibly bright, but they memorized formulas,” Gibbons said. “And when we ran into a word problem — and you know, I think this is a function of the educational track they put them on — they got lost in the weeds.”

As the discussion continued, his co-host asserted that the Chinese education system did a poor job of teaching critical thinking.

Asked about Gibbons’s comments, Samantha Cotten, a senior communications adviser to the campaign, said in an email, “Mike was discussing the difference in educational structure and attainment that he experienced in both business and graduate school in relation to China.”

“Defining an entire continent of billions of individuals by a singular characteristic is the definition of racism,” said Representative Judy Chu, a Democrat of California and the chairwoman of the Congressional Asian Pacific American Caucus. Gibbons’s comments, she added, “betray his own lack of ‘critical thinking.’”

Russell Jeung, the co-founder of Stop AAPI Hate, a group that monitors incidents of discrimination against Asian Americans and Pacific Islanders, said Gibbons’s description of Asian intelligence was “part of the dehumanizing rhetoric around AAPIs that has contributed to the surge in racism that harms us today.”

On the other hand, lumping Pacific Islanders in with Asian Americans is suddenly once against fashionable for no apparent reason, even though Pacific Islanders successfully petitioned the government to stop lumping them with Asians back around the turn of the century. The Pacific Islanders’ reasonable argument was basically that they aren’t much like Asians—they tend to be bigger and not as clever—so they have different issues than the numerically vaster Asians.

… The pandemic has also been accompanied by an alarming surge in attacks on Asian Americans across the United States. In the most recent example, in Yonkers, N.Y., a security camera captured a man assaulting a 67-year-old woman of Asian descent inside the entry to an apartment building. The video shows him hitting her more than 125 times, stomping on her crumpled body and spitting on her in what law enforcement officials said was a racially motivated incident. Here’s a photo of the obvious Republican voter about to attack the Asian woman.

He probably has a paperback copy of The Bell Curve in his pocket.