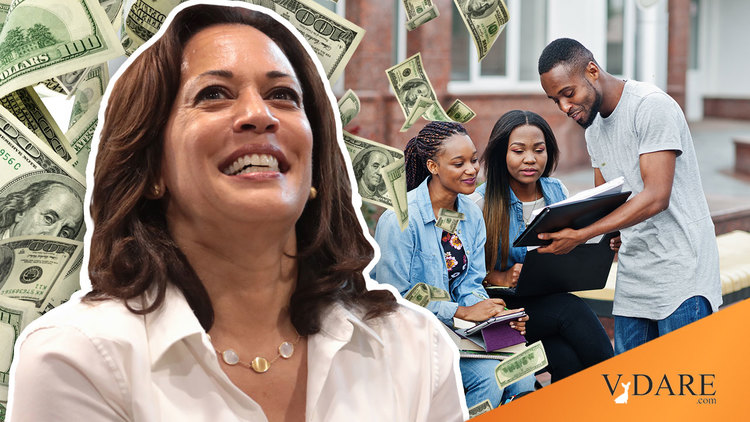 Easy Money: Kamala To Hand Out ~$100k Each To HBCUs Claiming A Bomb Threat

Earlier: How Smart Is Kamala Harris?

At least 36 HBCUs have face bomb threats in recent months.

Vice President Kamala Harris is set to announce that historically Black colleges and universities (HBCUs) will be eligible for new grant funding following a series of bomb threats made against them.

The Project School Emergency Response to Violence (SERV) program under the Department of Education is intended to enhance campus security and provide mental health resources by providing short-term, immediate funding for institutions that have experienced a “violent or traumatic incident.”

Harris “will make clear that every American should be able to learn, work, worship, and gather without fear,” a White House official told ABC News. The announcement will be made at the White House on Wednesday at 3 p.m.

HBCUs targeted by the threats could receive grants ranging from $50,000 to $150,000 per campus and will be determined based on specific needs.

Nor have I heard of any suspects being arrested.

No bombs were found.

From several years ago, here’s video of Kamala Harris and Jussie Smollett demonstrating together.

Also, on St. Patrick’s Day, from the House Committee on Oversight and Reform:

Washington D.C. (March 14, 2022)—On Thursday, March 17, 2022, at 9:00 a.m. ET, Rep. Carolyn B. Maloney, Chairwoman of the Committee on Oversight and Reform, and Rep. Jamie Raskin, Chairman of the Subcommittee on Civil Rights and Civil Liberties, will hold a hybrid hearing to examine ways the federal government can support Historically Black Colleges and Universities (HBCUs) in the face of recent threats to the students and faculty at these institutions.

Since January 2022, at least 36 HBCUs—more than one third of the nation’s 101 historically Black academic institutions—have been targeted with violent bomb threats. At least 18 of these institutions were targeted on February 1st alone—the first day of Black History Month. On February 23, 2022, the Federal Bureau of Investigation (FBI) announced that the bomb threats against HBCUs were being investigated as “racially or ethnically motivated violent extremism and hate crimes” and stated that the investigation was of the “highest priority.”

And what has the FBI discovered about the perps in the four weeks since?

These threats have come at a time when hate crimes and other acts of violent right-wing extremism are on the rise across the country.

This hearing will examine ways the federal government can support HBCUs in the face of threats to student safety and explore reforms to improve security on HBCU campuses and enhance efforts to prevent domestic terrorism.