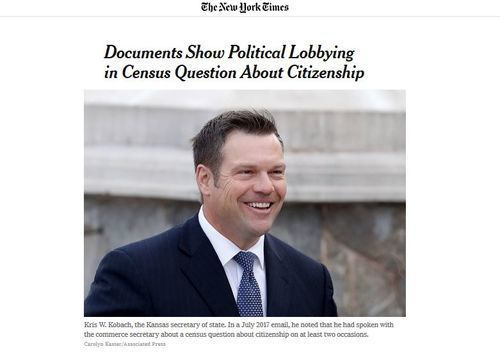 Here’s an amusing NYT article: We are Shocked, SHOCKED to learn that Kris Kobach, the GOP’s top legal expert on immigration law, expressed an opinion on putting a citizenship query in Census:

Kris W. Kobach, the Kansas secretary of state. In a July 2017 email, he noted that he had spoken with the commerce secretary about a census question about citizenship on at least two occasions.

It’s downright un-American for the American government to know whether people living in America are Americans. Only Canada would stoop so low:

STEP E – Question identifier 12: Where was this person born?

STEP E – Question identifier 13: Of what country is this person a citizen?

Indicate more than one citizenship, if applicable.

“Canada, by naturalization” refers to the process by which an immigrant is granted citizenship of Canada, under the Citizenship Act.

A “landed immigrant” (permanent resident) is a person who has been granted the right to live in Canada permanently by immigration authorities.

STEP E – Question identifier 15: In what year did this person first become a landed immigrant?