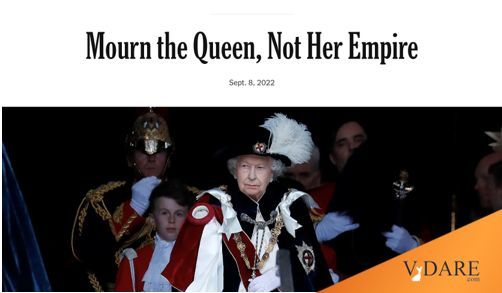 NYT Opinion: The Queen Didn't Apologize Enough For Being White

Ms. Jasanoff, a professor of history at Harvard, is the author of three books about the British Empire and its subjects. 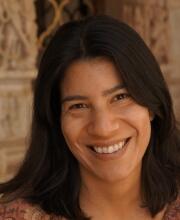 Ms. Jasanoff [Email her], a Harvard professor, is the daughter of two Harvard professors, a Jewish Indo-Europeanist linguist and an Asian Indian Kennedy School Professor of Something or Other. Her brother is an MIT professor.

… For the queen was also an image: the face of a nation that, during the course of her reign, witnessed the dissolution of nearly the entire British Empire into some 50 independent states and significantly reduced global influence. By design as much as by the accident of her long life, her presence as head of state and head of the Commonwealth, an association of Britain and its former colonies, put a stolid traditionalist front over decades of violent upheaval. As such, the queen helped obscure a bloody history of decolonization whose proportions and legacies have yet to be adequately acknowledged.

Honestly, what drives Asian Indians and sub-Saharans insane today is how easy was the British conquest of their lands. Britain was not a large country, but, without trying terribly hard, it managed to subdue huge populations.

… Members of the royal family made lavish ceremonial tours of the colonies, bestowing upon Indigenous Asian and African rulers an alphabet soup of orders and decorations. In 1947, then-Princess Elizabeth celebrated her 21st birthday on a royal tour in South Africa, delivering a much-quoted speech in which she promised that “my whole life, whether it be long or short, shall be devoted to your service and the service of our great imperial family to which we all belong.” She was on another royal tour, in Kenya, when she learned of her father’s death.

On Coronation Day in 1953, The Times of London proudly broke the news of the first successful summiting of Mount Everest by the Sherpa Tenzing Norgay and the New Zealander Edmund Hillary, calling it a “happy and vigorous augury for another Elizabethan era.”

The ex-British Army officer London Times reporter who broke that career-making story about the British Commonwealth conquering Mt. Everest on the Queen’s Coronation Day was James Morris, later Jan Morris, who went on to a triumphant career of writing Kiplingesque books. Obviously, Jan Morris was a true believer in Wokeness.

The imperialistic tenor of the news notwithstanding, Queen Elizabeth II would never be an empress in name — the independence of India and Pakistan in 1947 stripped away that title — but she inherited and sustained an imperial monarchy by assuming the title of head of the Commonwealth. “The Commonwealth bears no resemblance to the empires of the past,” she insisted in her Christmas Day message of 1953. Its history suggested otherwise. Initially imagined as a consortium of the “white” settler colonies (championed by the South African premier Jan Smuts), the Commonwealth had its origins in a racist and paternalistic conception of British rule as a form of tutelage, educating colonies into the mature responsibilities of self-government. Reconfigured in 1949 to accommodate newly independent Asian republics, the Commonwealth was the empire’s sequel and a vehicle for preserving Britain’s international influence.

It’s almost as if England rivaled the Scandinavian countries as the world’s greatest nation-state, but it got sidetracked into imperialism, and is thus now paying the price in places like Rotherham.

In photographs from Commonwealth leaders’ conferences, the white queen sits front and center among dozens of mostly nonwhite premiers, like a matriarch flanked by her offspring. She took her role very seriously, sometimes even clashing with her ministers to support Commonwealth interests over narrower political imperatives, like when she advocated multifaith Commonwealth Day services in the 1960s and encouraged a tougher line on apartheid South Africa.

It’s almost as if the Queen of England was totally into the multiracial Commonwealth rather than the English people.

What you would never know from the pictures — which is partly their point — is the violence that lies behind them.

You and I might think that the British Empire ended

In 1948 the colonial governor of Malaya declared a state of emergency to fight communist guerrillas, and British troops used counterinsurgency tactics the Americans would emulate in Vietnam.

The point is not that the Chinese Communists trying to take Malaysia away from the Malaysians in 1948 were Communist, the point is that they weren’t white.

…And there were always more royal tours for the press to cover. Nearly every year until the 2000s, the queen toured Commonwealth nations — a good bet for cheering crowds and flattering footage, her miles clocked and countries visited totted up as if they’d been heroically attained on foot rather than by royal yacht and Rolls-Royce: 44,000 miles and 13 territories to mark her coronation; 56,000 miles and 14 countries for the Silver Jubilee in 1977; an additional 40,000 miles traversing Jamaica, Australia, New Zealand and Canada for the Gold. The British Empire largely decolonized, but the monarchy did not.

… Though the queen’s personal popularity rebounded from its low point after the death of Princess Diana, the royal family split over Harry and Meghan’s accusations of racism.

In recent years, public pressure has been building on the British state and institutions to acknowledge and make amends for the legacies of empire, slavery and colonial violence.

… And she was, of course, a white face on all the coins, notes and stamps circulated in a rapidly diversifying nation: From perhaps one person of color in 200 Britons at her accession, the 2011 census counted one in seven.

What could be more racist than that?