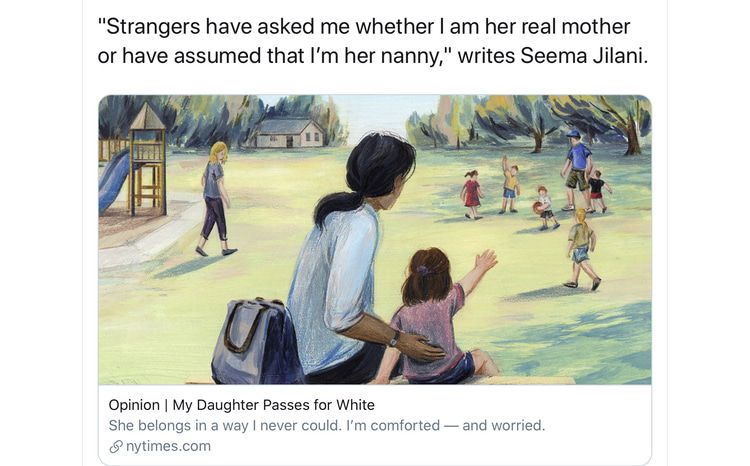 NYT: My Daughter Passes for White 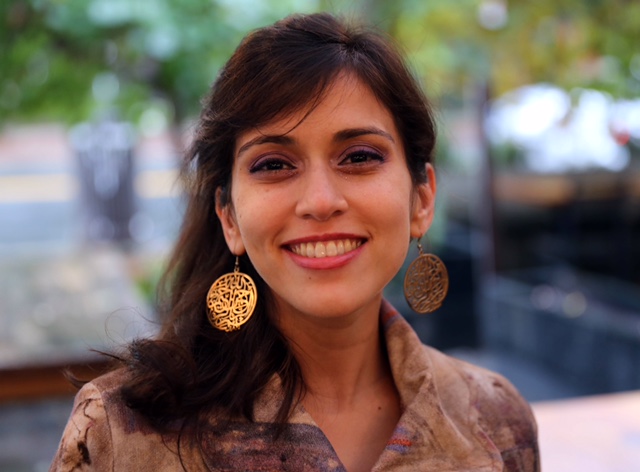 Here’s the umpty-umpth New York Times op-ed by a Woman of Color rehearing how oppressed she was by mean whites (i.e., girls) in, yes, middle school. But this one takes the anti-white cliches to a weird new level of sounding like she resents her own 3-year-old daughter for looking white.

My Daughter Passes for White
She belongs in a way I never could. I’m comforted — and worried.

By Seema Jilani
Ms. Jilani is a pediatrician and humanitarian aid worker.

I stand in the aisle of the school bus while the other seventh graders snicker and block me from sitting next to them, as they have for the entire school year. Taking my seat next to the bus driver, I look out to the road with resignation. My great-aunt, adorned in a colorful sari, waves goodbye to me while the entire school bus looks on. I want to disappear into the dingy brown vinyl bus seats. With the newfound cruelty of adolescence, I scoff and loudly tell my classmates, “That crazy lady is just my maid.”

I am still ashamed of how I treated my great-aunt. I also know it was a form of preteen self-preservation. I desperately wanted what so many other children that age do: to be as bland and vanilla as possible, just so that I could get through the day without being ostracized.

I now find myself in a mixed marriage

, mother to a 3-year-old mixed-race girl who easily passes for white. Her fair skin, auburn hair and light brown eyes

Did I mention that my daughter has fair skin (not wheatish, fair), auburn hair and light brown eyes?

do not even hint at her Pakistani background.

… When I went to school, I would toss my chicken tikka sandwiches, lovingly made by my mother, in the trash, so as not to infuse the school with the odor of cumin and suffer my classmates’ incessant jokes. …

A few years later, those glorious Manhattan pillars of American might crumbled. Though I did not know what the world held in store for us in the coming years — the threats, the insults, the judgmental looks — what I did know was that we were already tried, convicted and sentenced before we even knew what our crime was. …

But I didn’t pass. As I sat in large leather chairs at medical school interviews all over the country, with sweaty palms peeking through a navy business suit, I was asked whether I would wear a burqa as a doctor. (I have never worn a head scarf.) I was told that my religion was the reason Nigerian women were stoned every day, and was asked whether my father had taught me how to make bombs in our garage.

Luckily I came armed with Norman-Rockwellian-Americana stories filled with glorious tales of the grateful immigrant: hardworking and nonthreatening. I became a caricature of what they wanted.

This is the tumultuous conflict that my daughter will never have to know. I only wish it was because cultural attitudes had shifted, rather than because she has less melanin than I do. Her skin color has given her a sense of belonging

As my three year old said to me yesterday, “Mother, my non-wheatish level of melanin has given me a sense of belong, a feeling of white privilege, that you, with your disparaged intersectionality, never enjoyed.”

, something I never had. Instead, I worry whether she will be the one snickering, not allowing her classmate to sit next to her on the bus. After all, my bullies in school all looked like the daughter I have now. …

I have had to fight for this identity in a way my daughter, who easily passes for white, never will. My daughter has the privilege of choice, or of not choosing race at all; her default is white, and the power dynamic is in her favor. She will have a seat reserved for her on the school bus before she even gets on. However, I’ve found myself worried that she will internalize what the world tells her about her mother — that because of my darker skin, I am worth less. I remain terrified of the day that she tosses her kebab sandwich in the garbage and jeers at me — her brown-skinned, Urdu-speaking mother waving goodbye to her — and loudly tells her classmates, “She’s my nanny.”

Good luck, little girl. With your drama mama, you’re going to need it. She sounds like the kind of high maintenance mother who is jealous of your looks and will flirt with your prom date.