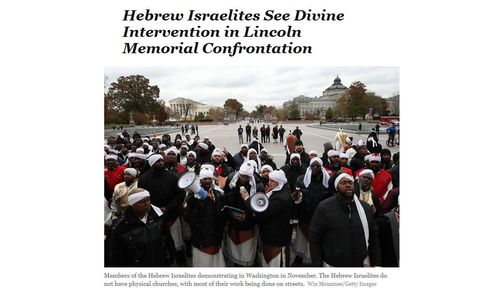 Black Hebrew Israelites are a crackpot hate group that has been around, in one form or another, for a long time. A few thousand, for example, got into Israel. They live in Dimona, Israel, down by the nuclear bomb factory.

But now they are getting Strange New Respect for their role in helping set off the media’s Two-Days Hate against that smiling white Catholic boy.

Steve, check out this NYT article…

“Though they have been name-checked by Kendrick Lamar in a rap called “Yah,” they have also been denounced by others as a hate group”

-so name- checking is some form of moral absolution

By Kendrick Lamar, who seems to be some kind of rapping saint/genius to the press.

“adherents contend that race does not exist, and so they eschew being referred to as black or categorizing anyone else by race. They group people instead based on what they call nations, believing that there are 12 tribes among God’s chosen people. White people are not among those tribes, they believe, and will therefore be servants when Christ returns to Earth.”

-Race doesn’t exist, they don’t categorize by race, but Whites must be servants

“If their interaction with the Catholic students seemed like an expression of bigotry toward white people, some of their most vile language is reserved for black people in the communities where they preach.”

“They argue that the best response to the evils of government is to separate and form their own institutions, Ms. Beirich said.

That is not necessarily a radical idea for many black people. But Ms. Beirich said that groups like Hebrew Israelites were also anti-gay, anti-white and anti-Semitic.”

Obama writes in Dreams From My Father about how he had been extremely sympathetic to Minister Farrakhan’s capitalist black nationalism—e.g., blacks should only buy toothpaste from black firms—until he realized there just wasn’t enough money in it. It was much more profitable to extract money from whites.

The quality of journalism is rapidly declining. For how long will legacy institutions hold up maintain their status?