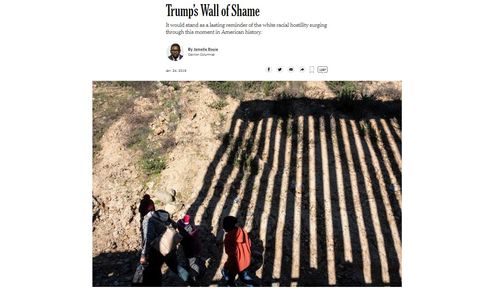 It would stand as a lasting reminder of the white racial hostility surging through this moment in American history.

This is Jamelle Bouie’s debut column.

Jamelle is a higher IQ version of Ta-Nehisi Coates.

… But the paramount reason for resisting this deal, and any other, is what it would mean symbolically to erect the wall or any portion of it. Like Trump himself, it would represent a repudiation of the pluralism and inclusivity that characterizes America at its best. It would stand as a lasting reminder of the white racial hostility surging through this moment in American history, a monument to this particular drive to preserve the United States as a white man’s country. …

But the president’s wall still looms as a racist provocation, a total repudiation of what the historian John Higham called “America’s cosmopolitan faith — a concept of nationality that stresses the diversity of the nation’s origins, the egalitarian dimension of its self-image, and the universality of its founding principles.” For Trump the wall signals his commitment to upholding existing hierarchies and strengthening their material foundations; for his supporters it validates their fears of cultural conquest. For the targets of their anxiety and aggression, it is a threat.

Early into the government shutdown, Speaker Nancy Pelosi called the wall “immoral.” She used the right word. The wall is a symbol of exclusion. If even a portion were built, that segment would serve as a modern monument to the worst of our nation’s heritage. No deal or compromise could justify that moral cost.

Jamelle Bouie became a New York Times Opinion columnist in 2019. Before that he was the chief political correspondent for Slate magazine. He is based in Charlottesville, Va., and Washington. @jbouie

A pretty good portion of it has already been built. Are they aware of this? Surely they also want the existing fence torn down?