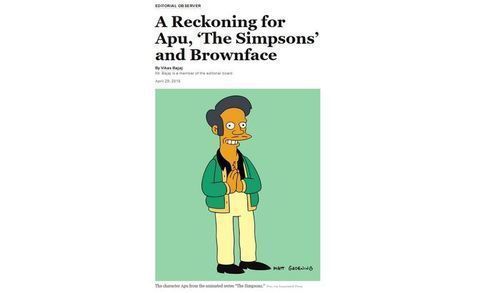 NYT Editorial Board Member Offended by Apu on "The Simpsons"

One trend I’ve been noticing lately is the ever-growing percentage of Professional Diversity Scolds who are from upper crust immigrant backgrounds from the more verbally facile countries, such as India. I would guess that the number of South Asians who got paid last year for berating white Americans in the American media outnumbered Mexican-Americans, despite Mexicans being vastly more numerous.

For example, here’s a New York Times editorial today in which an Indian immigrant staffer lectures Americans on how The Simpsons — as good a candidate for The Great American TV Show as any — must be censored for the amour propre of people like himself.

A Reckoning for Apu, ‘The Simpsons’ and Brownface

Mr. Bajaj is a member of the editorial board.

“Thank you, come again” — those four words, spoken in an exaggerated Indian accent, have followed immigrants and Americans of South Asian descent like a bad penny since “The Simpsons” premiered in 1989. They helped make Apu, the show’s tightfisted convenience store owner, a household name. And they are often repeated to us, with a sly grin or a guffaw, by the same people who are surprised that we speak English in grammatically sound sentences.

Interestingly, Mr. Bajaj [Tweet him] has himself apparently put a lot of hard work into ridding himself of most of his native Indian accent:

Last week brought Indian-Americans of my generation some relief: Hank Azaria, the white actor who has voiced Apu for 29 seasons, told Stephen Colbert that he is willing to stop playing the character because he now understands why Apu is troubling to the community that he is supposed to represent.

… Credit for his newfound enlightenment on this issue belongs to Hari Kondabolu, the comedian, whose 2017 documentary “The Problem With Apu” is a funny and informative explication of how the character perpetuated ugly stereotypes about South Asians that harm people to this day. Though “The Simpsons” has on occasion portrayed Apu and his family with nuance and pathos, the character also encourages the infantilizing of Indian immigrants as simple-minded people who talk in a singsong voice. Even Apu’s last name — Nahasapeemapetilon — is presented in a way that invites mockery.

What? “The Simpsons” mocked somebody?

Rev. Lovejoy [sententiously]: No, Homer, God didn’t burn your house down. But he was working in the hearts of your friends, be they [points to Ned Flanders] Christian, [nods to Krusty the Clown] Jew, or [gestures vaguely at Apu] … Miscellaneous.

Apu [annoyed]: Hindu. There are seven hundred million of us.

I bet when Mr. Bajaj watches that scene, he laughs: “Ha-ha, the joke is on you, condescending monotheist! There are now eleven hundred million of us, and I shall be writing ever more New York Times editorials about how America is racist if it doesn’t let in all my relatives.”

Of course, Mr. Azaria doesn’t control Apu’s fate on the show. That responsibility falls to the writers of “The Simpsons” and the corporate bosses at Fox, the network that airs the show. Going by what the show’s creator, Matt Groening, said dismissively about the criticism of Apu — “I think it’s a time in our culture where people love to pretend they’re offended,” he told USA Today — and the show’s churlish reaction to Mr. Kondabolu’s documentary on an episode earlier this month, Apu will probably remain ensconced in the Kwik-E-Mart.

No doubt such an outcome would please the many fans of Apu, some Indian-Americans among them, and those who love to rail against “political correctness” — Apu is just a funny fictional character, and critics are being overly sensitive, these people often argue.

But for many of us, it is not so easy to dismiss Apu and his accent as a mere joke. It is too often clear that the joke is on us …

After all, as a member of the New York Times Editorial Board, Mr. Bajaj is a personage of great dignity who must be immune from jokes. Doesn’t America have laws against lèse-majesté? What? It doesn’t? Well, let’s just say, there will be a few changes around here …

But many aspects of the character reveal Apu to be the brown equivalent of blackface minstrel performances. He comes across as a caricature designed to mock a minority for the entertainment of the majority. “Often, racism is dismissed under the guise of humor,” says Shilpa Davé, a professor at the University of Virginia and author of “Indian Accents: Brown Voice and Racial Performance in American Television and Film.” “There is always an undercurrent of truth to it and there is also an undercurrent of censure and satire.”

Brownface — or brown-voice, in the case of Mr. Azaria and Apu — does not have as long a history as blackface, but there are plenty of examples of it. Mr. Azaria has said he was inspired by a performance Peter Sellers gave in a 1968 comedic movie, “The Party.”

Let’s burn all Peter Sellers movies while we’re at it.

But keeping Apu on “The Simpsons” in his current form would be a huge missed opportunity for the show, which on the whole has been one of the most thoughtful voices in American popular culture by addressing issues like immigration, discrimination and the power of big corporations that most network TV shows have studiously avoided.

Now that I think about it, Mr. Bajaj, I like Apu more than I like you. How about we keep Apu and lose you.