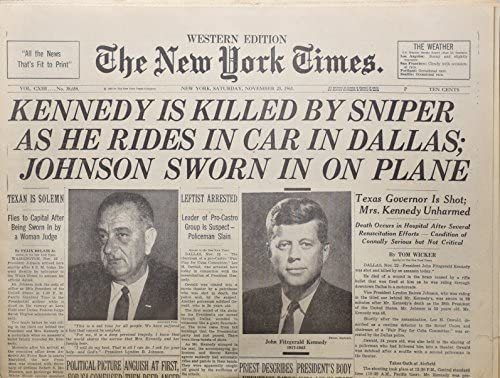 Whereas the New York Times' previous hallucination about how rightwing Dallas murdered JFK was labeled "Opinion," this new one is supposed to be reporting. The main difference is that this "news story" eventually does get around to mentioning the name "Lee Harvey Oswald."

A Changed Dallas Grapples With Its Darkest Day

DALLAS — When President John F. Kennedy’s motorcade left the airport here shortly before noon on Nov. 22, 1963, the man seated in the lead car was the county sheriff, Bill Decker, 65, a storied Texas lawman who led the hunt for Bonnie and Clyde. Fifty years later, the badge belongs to Lupe Valdez, 66, the daughter of Mexican migrant farmworkers. She is the only sheriff in America who is an openly gay Hispanic woman. Voters re-elected Sheriff Valdez, a Democrat, to a third term last year.

Dealey Plaza – where the darkest day in Dallas history unfolded 40 minutes after the motorcade began – looks eerily similar to what it was then, the sixth-floor corner window of the former Texas School Book Depository still cracked open slightly. But Dallas itself is almost as different as Bill Decker is from Lupe Valdez.

And the tension between past and present has unleashed a wave of citywide self-reflection a half-century later in a distinctly American place that is part Dallas Cowboys, part Texas excess and part urban melting pot, where the public school students come from homes where 70 languages are spoken. Painful, embarrassing memories of the angry anti-Washington culture that flourished here 50 years ago – and now seems a permanent part of the national mood – have resurfaced, confronting Dallasites daily.

Blocks from Dealey Plaza, the windows of restaurants and the lobbies of hotels are plastered with posters reading “Love” – a nonprofit group’s campaign, using artwork by schoolchildren and others, to counter the City of Hate label given Dallas after the assassination. As the city prepares for the biggest event it has ever held to mark the assassination on Friday – led by Mayor Michael S. Rawlings, a committee of civic leaders raised about $3 million in private donations for the ceremony – the focus has been on the city’s legacy as much as Kennedy’s.

“I’ve learned a lot about my city through this,” Mr. Rawlings said. “The world is peering into Dallas and saying, What’s that place all about right now, 50 years later? We’ve grown a lot, and we’ve changed a lot. The main story about Dallas is it took that punch and turned that tragedy into motivation to go to the next level.”

In the early 1960s, a small but vocal subset of the Dallas power structure turned the political climate toxic, inciting a right-wing hysteria that led to attacks on visiting public figures. In the years and months before Kennedy was assassinated, Lyndon B. Johnson, his wife, Lady Bird, and Adlai E. Stevenson, the United States ambassador to the United Nations, were jostled and spat upon in Dallas by angry mobs. In sermons, rallies, newspapers and radio broadcasts, the city’s richest oil baron, a Republican congressman, a Baptist pastor and others, including the local John Birch Society, filled Dallas with an angry McCarthy-esque paranoia.

The immediate reaction of many in Dallas to the news that Kennedy had been shot was not only shock but also a sickening sense of recognition. Moments after hearing about the shooting, the wife of the Methodist bishop told Tom J. Simmons, an editor at The Dallas Morning News, “You might have known it would be Dallas.”

For months, a city that had long been proud of its image of wealth and success has been exploring this ugly past, a past it once sought to play down and even ignore. A letter co-signed by Mr. Rawlings inviting the public to a recent symposium bluntly asked, “Were we somehow to blame?” The Dallas Morning News – whose publisher in the 1960s, Ted Dealey, used to refer to the N.A.A.C.P. as the National Association for the Agitation of the Colored People – has not spared Mr. Dealey from its 50th anniversary coverage. Last month, it called Mr. Dealey’s face-to-face ridiculing of Kennedy, which came in 1961 at a White House luncheon, a “rude display.”

Time has given Dallas enough distance – the majority of residents were either not born or were living elsewhere 50 years ago, and the white-hot figures have either died or moved away. But more important, Dallas has been comfortable publicly grappling with its past in part because what it was then is so different from what it is now.

In 1963, Dallas was the 14th-largest city in the country, with a majority-white population of nearly 700,000, a provincial place whose mostly white, mostly male establishment set the agenda. In 2013, Dallas is the nation’s ninth-largest city, with a majority-minority population of 1.2 million. It is home to the first black district attorney in Texas and the largest urban arts district in the country. Most of the suburbs in the Dallas-Fort Worth region are solidly Republican and bastions of Tea Party conservatives, but Dallas itself leans Democratic. Though President Obama lost Texas in the 2012 election by nearly 1.3 million votes, he handily won Dallas County.

“Dallas is like our country – we are a work in progress,” said Ron Kirk, who served as the city’s first black mayor from 1995 to 2002. “When you look back and reflect on some of the rhetoric that filled our city streets, you do realize that that can target us all, and the actions of a few have the ability to reflect back on all of us.”

The extremism in Dallas in 1963 still thrives in Texas today, though less so in Dallas itself. Back then, commentators on the radio program sponsored by the oil baron H.?L. Hunt said that under Kennedy, firearms would be outlawed so people would not “have the weapons with which to rise up against their oppressors.”

This past February, in West Texas, the sheriff in Midland County, Gary Painter, said at a John Birch Society luncheon that he would refuse to confiscate people’s guns from their homes if ordered by the Obama administration and referred to the president’s State of the Union address as “propaganda.”

Other Texas politicians in recent years have embraced or suggested support for increasingly radical views, including Texas secession, Mr. Obama’s impeachment and claims that the sovereignty of the United States will be handed over to the United Nations. And, of course, it is not just in Texas.

“I recently met a retired autoworker in Detroit who told me that I could change my book title to ‘America 2013,’ and the story would be the same,” said Bill Minutaglio, a former Dallas reporter whose new book, “Dallas 1963,” written with Steven L. Davis, examines the far-right fringe in the city. He said “modern demonizing politics in America” in some ways took shape in Dallas in the 1960s.

He added, “It is as if the lessons in Dallas have not been learned 50 years later.”

It only took the NYT 1,119 words to get around to mentioning the guy who actually killed Kennedy.

was a Marxist and not a product of right-wing Dallas. But because the anti-Kennedy tenor came not so much from radical outcasts but from parts of mainstream Dallas, some say the anger seemed to come with the city’s informal blessing.

“It was, I think, a city that was tolerant of hate and hate language,” said John A. Hill, 71, who in 1963 was student-body president of Southern Methodist University in Dallas. “There were people who spoke out against that, but in general city leaders were indifferent to that toxic atmosphere.”

In the 1970s, there was a strong push to tear down the shuttered Texas School Book Depository. A handful of leaders, including Wes Wise, then the mayor, succeeded in preserving the redbrick building, which the county bought in 1977. The top two floors were later turned into a museum. Now, more than 320,000 people each year stand next to Oswald’s sniper’s perch on the sixth floor and peer out the windows at Dealey Plaza below.

“When you think about an effort to tear down the building in the ?70s, you can really get a sense of how far Dallas has come in accepting and internalizing this deep tragedy,” said Stephen Fagin, associate curator of the Sixth Floor Museum at Dealey Plaza, which opened in 1989. “This is the journey Dallas has taken, from assassination to commemoration, moving from memory to history.”

Now its first five floors are occupied by county offices. One who often has county business there is Sheriff Valdez.

After becoming sheriff in 2005, she struggled in her first three or four years to change the culture of the department, some members of which were hostile to the notion of a Latina lesbian sheriff. “It depends on who you asked,” she said, when asked of the initial reaction. “If you asked some of the good old boys, I can’t repeat the phrases that were said.”

But the department has changed tremendously since 2005, she said. Just as Dallas has changed since 1963. “That was 50 years ago,” Sheriff Valdez said. “My goodness. I hope we’ve changed some.”

Never again can we allow a vast conspiracy of white men to assassinate a liberal President, as the White Male Power Structure of Dallas murdered JFK. The government must continue to elect a new people less dangerous to the government than the old.