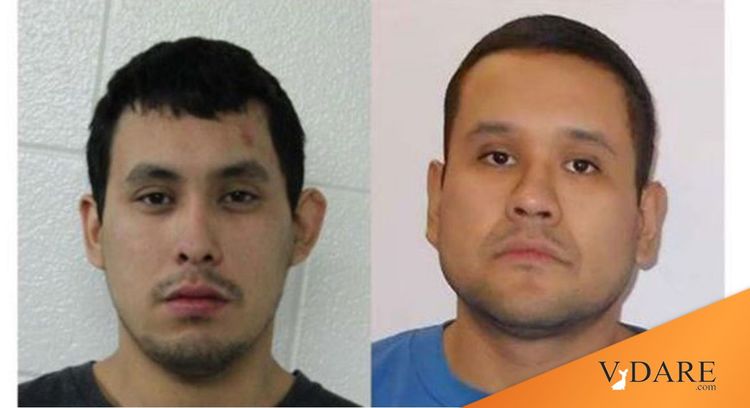 NYT: Are The Stabby Sanderson Brothers Indians? Don't Ask Us!

Earlier (2016): Mass Shooting In Canada Is An Indian Reservation Story, Not A "Gun Control" Story

From the New York Times news section, a good example from reporting on the stabby Sanderson Brothers of Saskatchewan of how NYT reporters compromise between their own best instincts to report the news and management’s dictates to not upset subscribers’ prejudices about who the Bad Guys must be.

That ten people were murdered by stabbing rather than by gunshot is bad enough, but that the mass murderers aren’t white is intolerable. Mass shooters, or in this case mass stabbers, are always white. That’s because white men are evil.

Thus, the Sandersons are repeatedly described in reference to “the community” but what race they are is never ever made explicit to any reader with less than a high IQ and a Bad Attitude:

A Kick at the Door, a Knife in the Hand: The Saskatchewan Murders

As investigators pore over a sprawling and complex trail of crimes, a clearer picture is emerging of the stabbing rampage on an Indigenous reserve in Canada.

JAMES SMITH CREE NATION, Saskatchewan — The hunt for the killer behind the rampage that killed 10 people in Western Canada ended on Highway 11, a rural Saskatchewan roadway surrounded by dusty fields.

The Royal Canadian Mounted Police had run the fugitive’s stolen white truck off the road after chasing it at speeds of more than 90 m.p.h. Then they surrounded the suspect and captured him.

Four days after the tight-knit community was horrified by the spasm of brutality, Myles Sanderson was in police custody. On the Indigenous reserve where most of the violence played out, residents rejoiced at the news. But their celebration at the prospect of a killer facing justice was short-lived.

Hours after the arrest, the authorities issued a stunning announcement: Mr. Sanderson had died in police custody under unexplained circumstances. A knife had been found in the truck after his arrest, they said, and it appeared that he was in “medical distress.” …

The reserve and the community around it in the western Canadian province of Saskatchewan are no strangers to crime, even murder, much of it tied to the crystal meth trade, residents say. But the authorities there have rarely seen anything like the events that began in the predawn hours Sunday, when Myles, 32, and his brother Damien, 31, embarked on the attacks, which also wounded 18. …

As investigators proceed, the outline of what happened at the reserve, James Smith Cree Nation, has begun to fill in. More questions are being answered. The police, for example, now believe that Myles, long a community outcast, killed most of the victims, aided by his brother. Many in the community also believe they know what happened to Damien: Myles, they say, appears to have killed him for trying to end the rampage.

OK, seriously, if you are a Bad Person, have a high IQ, are reading very carefully, and are already suspicious, you can likely deduce that this means that Myles Sanderson being “a community outcast” must have been a member of the James Smith Cree Nation, which is, apparently, a “reserve” or reservation for the “indigenous ” or Amerindian or whatever the Canadian equivalent of American Indian is, such as First Nations.

But that’s never ever made explicit in the NYT article.

From now on, I’m in NYT subscriber mode:

… But one thing is clear: It all began around 5:40 a.m., as many in the Indigenous reserve were still asleep.

Residents recall waking up to the news that Myles Sanderson, a parolee who was six foot one and 240 pounds, and had a well-demonstrated appetite for fighting, was kicking down doors and stabbing people.

An obvious Aryan Nation / Proud Boy type. That’s what they do.

As panic and fear spread across the reserve, residents fetched their guns and barricaded their doors with tables and chairs.

Wait a minute, the people on the reserve are the Good Guys, right? So why do they have guns to fetch?

Tyrel Sanderson said the day began with frantic calls from his mother and other family members. They wanted to make sure he was all right. “They told me that there was a mass murder happening,” he recalled.

Tyrel knew Myles Sanderson, a relative and old schoolmate — the whole reserve did.

Wait a minute, how is Tyrel Sanderson of the reserve related to Myles Sanderson?

Eh, never mind, my brain is too tired to worry about that…

A high school dropout, he had 59 criminal convictions and a long history of substance abuse.

“He was the kind of person people stayed away from,” Tyrel said.

Theories have swirled around the community about what set Mr. Sanderson off that day, but Tyrel said he suspected that drugs, alcohol and gang-related violence had played a role, a refrain heard across the reserve.

“These acts of violence have to stop and they have to stop now,” the reserve’s chief, Wally Burns, said on Thursday, struggling for words. “We’re going to protect our community, fight against drugs and alcohol.” He called on the province and the federal government to establish an Indigenous police force on the reserve, to expand substance abuse programs and to set up a long-term recovery center.

Residents of the reserve said Mr. Sanderson, who was released from custody earlier this year, had fought with many people in the community.

It’s almost as if Mr. Sanderson were a member of the community. But of course the New York Times would tell me, a valued subscriber, if he were nonwhite rather than coyly hinting about it, so he must be just another one of these white mass murderers who are running amok.

… In all, nine people were killed on the reserve, the oldest of them retirees and the youngest age 23.

On Thursday, at a news conference on the reserve, Darryl Burns, whose sister Gloria was among the dead, brought Damien Sanderson’s widow, Sky Cloud Sanderson, up to the microphone and asked her to accept the forgiveness of the community for her husband’s role in the killings.