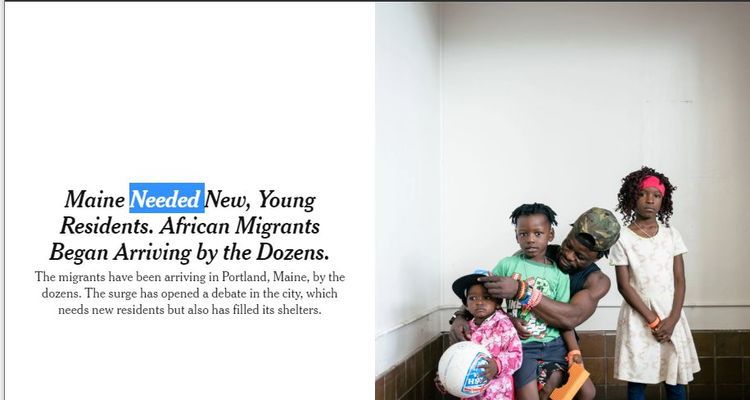 NYT: Africans Are Pouring Into Portland, Maine for the Welfare, But That's a Good Thing! Maine NEEDS Congolese

The migrants have been arriving in Portland, Maine, by the dozens. The surge has opened a debate in the city, which needs new residents but also has filled its shelters.

You might have your own (ignorant) opinion on the subject, but it’s a simple fact that Portland, Maine needs Congolese. That’s just Science.

PORTLAND, Me. — … This month, 250 migrants from Africa arrived in this northeastern city of roughly 67,000 residents in the span of just a week, overflowing the overflow space and forcing Portland to hastily convert a basketball arena into an emergency shelter. Urgent calls went out for interpreters who could speak French, Portuguese and Lingala, a language spoken in the Democratic Republic of Congo. City Council meetings were given over to grappling with how Portland would pay for all of this — and the possibility that still more migrants might be coming.

Do you think there could be more where these ones came from?

It is a bit of a mystery in Maine, one of the oldest and whitest states in the country, how Portland has become a focal point for a sudden surge of migrants, mostly from Angola and Congo, who are seeking asylum.

Maine has long wrestled with an aging work force, and some leaders view immigrants as a welcome answer to the state’s struggles to lure younger people to live and work here.

Actually, like the other Portland, Portland, Maine is fashionable with well-educated young Americans. From Salon in 2016:

Portland, Maine, the “other” Portland, is a desirable city to live in if you don’t mind the chilly winters. It shows up on a lot of lists: Most Livable Cities, Hippest Cities, Healthiest Cities, Foodie-est Cities, etc. And that makes it a desirable location for the well-to-do to relocate. The problem is that there is only a limited housing stock to accommodate the incoming hordes of affluent people seeking to live in the attractive oceanside city. The result is that newcomers battle longtime residents for housing, and housing costs go up. Among the largest 100 metropolitan areas, Portland, Maine had the second largest rise in rental rates in the U.S. Rents rose 17.4%, the median rent in Portland rising to $1582, more than much larger Philadelphia and Chicago. With many hundreds of new families relocating to the city every year, a housing shortage has worsened, and the rent increases have driven the working class out of town in droves. Portland’s vacancy rate is near zero. Meanwhile shelters for the homeless are overflowing with citizens unable to compete with newcomers who consider the $1600 rents cheap by their former standards. The city has been struggling to come up with workable options to increase affordable housing without impacting Portland’s “livability.” Meanwhile, as rents have increased 40% in the past five years, Mayor Ethan Strimling has acknowledged that there was a $500 gap between what people make in Portland and what they can afford to pay for housing.

But back to the New York Times:

Still, the sheer numbers — and the suddenness of the latest arrivals — have opened up a debate about how much Portland should be doing to help immigrants and whether it should entice more of them to come.

“I love the fact that these folks are coming here, and they want a better life, and they’ve chosen Portland,” Jon Jennings, the city manager, said. “But at the same time, I’ve got to figure out how to pay to pave streets and fix sidewalks and all of the things that are uniquely responsible to a municipal government.”

City Managers (non-politicians hired for their managerial competence) are not necessarily the most Woke people compared to grandstanding mayors. I had lunch with the City Manager of a famously liberal small city last year and he looked and dressed as conservatively as Mr. Drysdale, the Clampetts’ bank manager on The Beverly Hillbillies.

There is friction over the issue, even inside City Hall.

“If we have discovered the magic wand that will bring young families to Portland to help us build the next generation, why would we want to stop that, especially when it costs us so little money?” Ethan Strimling, Portland’s mayor, said.

The migrants arriving in this city have undergone a grueling journey, traveling by air or sea to South America, and then north on foot and by bus to the southern border of the United States, where most of them were arrested by border officials and released with notices to appear in immigration court after they declared their intention to seek asylum.

… Hundreds of African migrants arrived just this month and were taken to San Antonio, where Catholic Charities provided bus tickets to Portland and other cities that the migrants named as their destinations.

Among Portland’s residents and even some of the families arriving from Africa, it is uncertain how this place became such a draw.

Mr. Strimling, the mayor, has been an outspoken advocate for welcoming immigrants. In April, when President Trump wrote on Twitter that his administration was considering sending detained immigrants to so-called sanctuary cities, Mr. Strimling responded: “If he wants to send more immigrants our way, bring them on.”

But Mr. Jennings, who runs the day-to-day operations of Portland, expressed concern about the costs of aiding everyone, and criticized the mayor for having essentially invited asylum seekers to come here.

… Inside the Expo, the basketball arena now filled with 200 cots, families gave varying reasons for choosing Portland, a city that is 81 percent white but that already has a sizable community of immigrants from Africa, including from Congo and Angola. About 13 percent of the city’s population is foreign born, according to census data, many of those residents from Somalia.

Gloire Kikweta, 24, who came from Congo with his wife and two children — the younger of whom was born in Brazil on their way here — said he had left his home because he was being pursued by law enforcement for participating in protests against the former president, Joseph Kabila.

Kabilia has been out of power since January.

He said he did not have a plan of where to go in the United States, but when he was in San Antonio, African immigrants there advised him to go to Portland, telling him that it was an aging city that needed more people, and that it was safe.

Vincent Mbala, 32, who is also from Congo, and came with his wife and three children, said that he learned through internet research that Maine provided financial support for asylum seekers. Maine is unusual in providing general assistance, for up to two years, to immigrants who have valid visas or who have applied for asylum. … Portland also has what local officials believe is the only municipal fund in the country that provides support to asylum seekers before they submit their applications.

There’s your problem right there.

… Complaints, too, have come. Some Portland residents said that the city needed to focus more on local needs. The views reflected strains caused by Portland’s recent success in attracting another group — young professionals from other states — whose presence has driven up rents even as it has fueled the local economy.

So, like I pointed out above, Portland is doing fine attracting white yuppies.

… Mr. Strimling, who recently announced he is seeking re-election as mayor, said he wanted to keep the fund open to anyone who needed it. He said that he doubted many migrants were coming to Portland because they had heard about the fund, but that, if they were, it was all the more reason to keep it going. …

In Parkside, not far from the Expo, Timothy Goldkin, 29, called it a “beautiful thing” to have more diversity in Maine. Mr. Goldkin, who has a housemate who is an asylum seeker, said he would rather have more immigrants in Portland than wealthy people migrating from other states and changing the city’s landscape and culture.

“I’m much more worried about the people with lots of money who want to just completely make it their town, with zero regard to what it was,” he said, “than the folks who are fleeing persecution and in fear of their life and who are coming here to try to understand our culture

That’s why all the African asylum seekers have well-thumbed copies of Moby Dick and the complete works of E.B. White.

and integrate into it, while still holding onto and bringing some of their own loveliness.”

The article ends with the expectation that the Congolese will soon move from the dole in the city to the Great North Woods to fill critical lumberjack jobs.

For now, a major challenge for the city is to find permanent housing for the scores of families staying at the Expo and another shelter. Neighboring cities have agreed to help identify vacancies, and Mr. Jennings said that a lumber company in Jackman, three hours north of Portland, had reached out with an offer to house some of the families in Jackman if they were interested in working for the company.

“I’ve had people all over the state inquire about whether some of these folks could come to other parts of the state, because they need qualified workers,” Mr. Jennings said. “They need new people.”

There are trees rotting in the forests.