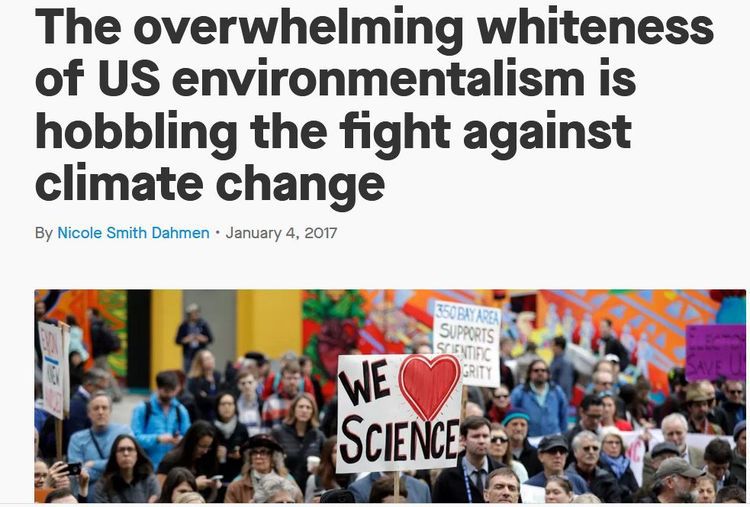 Environmentalism has been an almost exclusively white political movement since its inception but the browning of America is transforming environmentalism into just another political tool for racial grievance-mongers. Lefties at SJW websites like Vox and Quartz have been complaining about environmentalism being "too white" and needing "more diversity" for years now.

It appears that Vox and Quartz got what they wanted as we are now witnessing the birth of "Climate Justice" which is explicitly referenced in the recently passed New York climate legislation.

New York lawmakers have agreed to pass a sweeping climate plan that calls for the state to all but eliminate its greenhouse gas emissions by 2050, envisioning an era when gas-guzzling cars, oil-burning heaters and furnaces would be phased out, and all of the state’s electricity would come from carbon-free sources. [New York to Approve One of the World’s Most Ambitious Climate Plans, by Jesse McKinley and Brad Plumer, New York Times, June 18, 2019]

The New York state climate and community protection act [PDF] states that “Climate change especially heightens the vulnerability of disadvantaged communities, which bear environmental and socioeconomic burdens as well as legacies of racial and ethnic discrimination.” This “climate justice” race-based ideology pervades the entire law which establishes a council, as well as a “climate justice working group” to review what can be done with the main outcome being the transfer of large amounts of public money to these “disadvantaged communities.”

The bill would spend 40% of the state's clean energy revenues on energy efficiency measures and renewable installations in disadvantaged communities… which would amount to $370 million in fiscal 2018-19. [N.Y. lawmakers agree to historic climate plan, by Benjamin Storrow, E&E News, June 18, 2019]

It’s likely that the implementation of this law will become just another excuse for handouts to minority majority communities and any actual changes that might impact the environment will be a mere afterthought.

The harm to New York manufacturing posed by the new law was acknowledged by the biggest pro-business lobby in the state, the New York Business Council, which warned that

“new drastic and unpractical carbon policies, that their global competitors are not subject to, put [New York manufacturers] at a significant economic disadvantage. Approximately 40,000 jobs will be impacted and hundreds of companies around the State will be forced to make a decision between closing their doors or reinvesting in other parts of the country or the world.”

It's frustrating to see the New York Business Council upset by the continued leftward drift of state government which is only possible due to immigration driven demographic changes since their Big Business lobby is one of the biggest advocates for increased immigration in the state. For instance, they just recently endorsed a bill giving New York State drivers licenses to illegal immigrants which was signed into law earlier this week.

If there is any “justice” involved in this maddening ordeal, it’s that the New York Business Council and the short-sighted business executives behind it will learn the hard way that demographics is destiny.