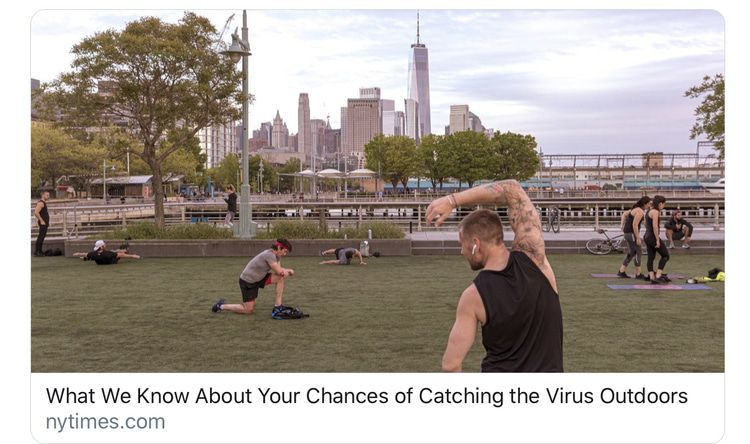 NYT: Actually, It's Good to Go Outside

A massive problem in American life today is the number of people and institutions averse to learning how to deal with the virus for fear that it would reveal that some of their early opinions were wrong. For example, many people have doubled down on lockdowns rather than admit that was a crude blunderbuss policy motivated by the ignorance of the times back in March, which of course should be replaced quickly by more accurate and focused practices.

Shouldn’t leaders be telling us: Here’s what we’ve learned over the last two months:

But instead, The Experts keep screaming at us to do X, Y, Z, A, B, and C indefinitely as if they haven’t managed to learn a damn thing.

Here’s a New York Times article on May 15 that finally sort of gets around to admitting without precisely coming clean that much of the Stay Inside hectoring of the last two months turns out to have been misguided. But the article never quite mentions that the Latest Conventional Wisdom is different from Old Conventional Wisdom:

What We Know About Your Chances of Catching the Virus Outdoors

A stir-crazy nation wonders: Is it safe to stroll on the beach in a deadly pandemic? How about a picnic in the park? Or coffee with a friend at an outdoor table? The risk is in the details.

By Michael Levenson, Tara Parker-Pope and James Gorman
May 15, 2020

… The good news: Interviews show a growing consensus among experts that, if Americans are going to leave their homes, it’s safer to be outside than in the office or the mall. With fresh air and more space between people, the risk goes down.

But experts also expressed particular caution about outdoor dining, using locker rooms at pools and crowds in places like beaches.

Just look at the photos of the crowds on the beaches!

Will the New York Times ever admit it got repeatedly snookered by the oldest trick in its own photographers’ book: using a telephoto lens to make a picture look more crowded by foreshortening distance?

So, the country gets stuck between, on one side, a whole bunch of people who remain adamant that the big dangers are beaches and golf courses, and on the other side, people who are convinced that the only reason their tongue-piercing parlor in Atlanta isn’t back 100% yet is because governors in distant states are persisting with government-ordered shutdown and instead the the least the government should do would be rounding up scaredy-cats and dragging them in to get their tongue pierced today.