NYT Falls for Its Own Telephoto "Images of Packed Shores"

Frustrated by Crowds, Coastal States Weigh What to Do About Beaches

Images of packed shores have prompted a furor against officials in coastal states like California and Florida, who have resisted statewide beach closure orders.

MIAMI — The salty breeze and ocean waves have beckoned stir-crazy residents of the coast back to their beloved beaches, social distancing norms be damned.

But how to prevent beach blankets and lawn chairs from becoming new founts of coronavirus infection has become a flash point for governors in Florida, California and other coastal states, who must balance demands from constituents for relief from the escalating spring heat against the horrified reaction of the general public to photos of sweaty, swimsuit-clad bodies packed towel to towel.

Gov. Gavin Newsom of California stepped in on Thursday to shut down the beaches in Orange County, rolling back earlier attempts at giving people there a chance to stroll along the shore while staying a safe distance away from one another. Broad swaths of sand were packed over the weekend with crowds, with many people flocking from neighboring Los Angeles and San Diego Counties, where the beaches had been off-limits.

And here’s the NYT’s photo of Huntington Beach to prove how packed the shores were in Orange County: 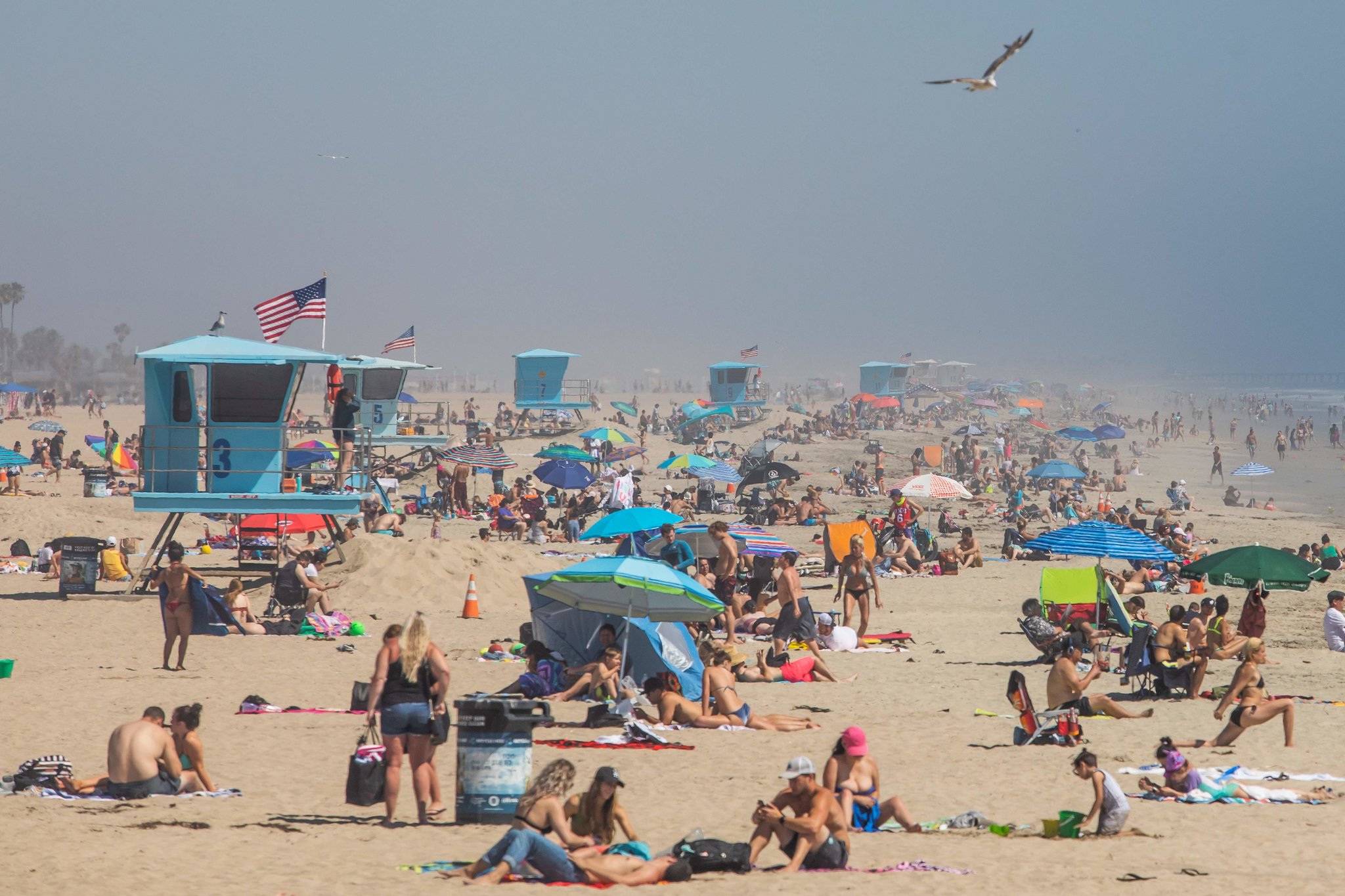 “People flocked to Huntington Beach, Calif., last weekend despite advice that they keep their distance from one another to limit the spread of the coronavirus.” Credit…Apu Gomes/Agence France-Presse — Getty Images

Fortunately, this photo includes numbered lifeguard towers, so we can match it up against a map.

The photographer appears to be standing on Huntington Pier and shooting with a distance-compressing telephoto lens. How far is it in reality between, say, Lifeguard Tower 3 and Lifeguard Tower 5, the two closest in the picture? Google Maps’ aerial photo (taken on some other day) suggests it’s about 600 feet from the pier to Tower 3, then around 400 feet between Tower 3 and Tower 5, so Tower 11, the fifth tower, would be about 2200 feet away. At a 2 mph stroll, it would take about 14 minutes to walk from under the pier to Tower 11. 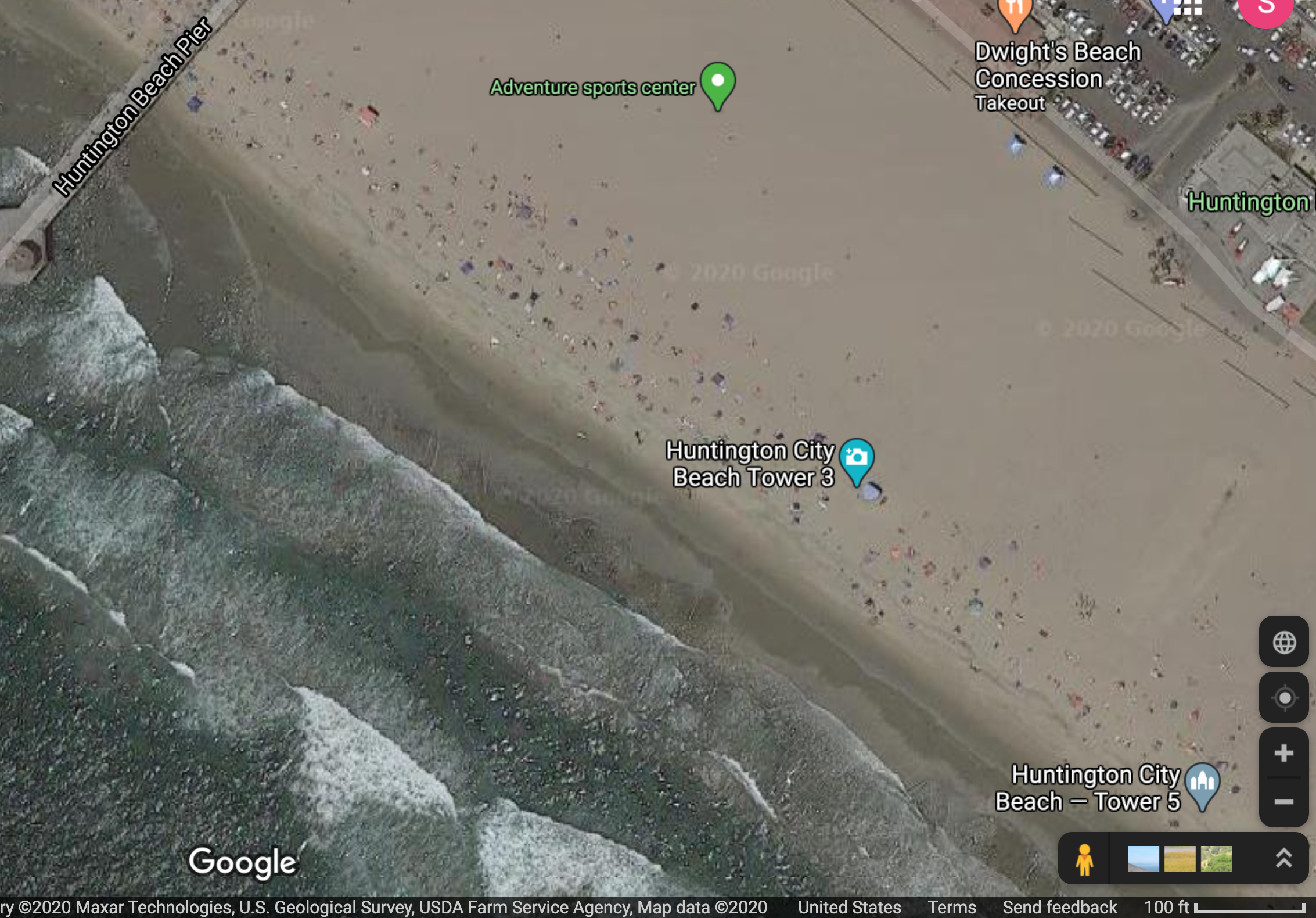 Here’s another photo with less of a telephoto effect. I presume the pink-roofed tower would be Tower 1, which isn’t included in the NYT photo: Shouldn’t somebody at the New York Times be familiar with the oldest trick in articles about crowded beaches: using a telephoto lens?

One concern is that if the Governor announced, “Oh, darn, I was misled by sneaky telephoto pictures, the Orange County beaches weren’t as crowded as I had assumed, so I hereby declare them open!” But then really huge crowds might head to the beach on Saturday, starting another cycle of stupidity.

But that would be too reasonable.

And from the Babylon Bee:

California Prisons Release Thousands Of Felons To Make Room For Skaters, Surfers, People Who Go Outside https://t.co/u4PoTDUVvY via @TheBabylonBee