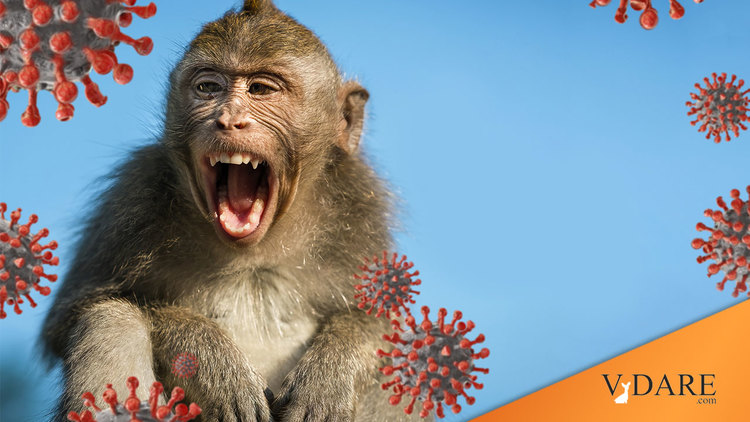 NYC Health Czar Takes Decisive Action Against Monkeypox: He Demands WHO Change The Name “Monkeypox“ To Some Incomprehensible String Of Characters

The New York City Department of Health and Mental Hygiene is taking action on monkeypox.

Is it shutting down gay circuit parties? Of course not.

Instead, it has written a letter to the World Health Organization demanding that monkeypox be renamed something confusing and forgettable because the word “monkeypox” is such a catchy and funny word that it’s hard to say it just once. Monkeypox, monkeypox, monkeypox.

Monkeypox is the Gorilla Glue of disease brand names: highly memorable. So therefore the NYC Health supremo wants it discarded because the disease, which so far has been spread almost solely by gay hedonism, is embarrassing to wokeness.

… Further, we have a growing concern for the potentially devastating and stigmatizing effects that the messaging around the “monkeypox” virus can have on these already vulnerable communities. Therefore, I write to urge you to act immediately on renaming the “monkeypox” virus as the WHO stated they would do during a June 14th press briefing, over 5 weeks ago.

NYC joins many public health experts and community leaders who have expressed their serious concern about continuing to exclusively use the term “monkeypox” given the stigma it may engender, and the painful and racist history within which terminology like this is rooted for communities of color.

“Monkeypox” is a misnomer, as the virus does not originate in monkeys and was only classified as such due to an infection seen in research primates. And we know alternative terminology is possible and entities are starting to use terms such as “hMPXV” and “MPV.”

We must raise awareness of the monkeypox menace by never again referring to it as monkeypox and instead only refer to it as hMPXV!

… Further, as we are reminded by fierce

advocates who served on the front lines as the HIV/AIDS epidemic emerged, early misinformation about the virus led people to believe that it was spread to humans after people in Africa engaged in sexual activity with monkeys. This kind of false messaging created incalculable harm and stigma for decades to come. Continuing to use the term “monkeypox” to describe the current outbreak may reignite these traumatic feelings of racism and stigma — particularly for Black people and other people of color, as well as members of the LGBTQIA+ communities, and it is possible that they may avoid engaging in vital health care services because of it.

The language we use in public health matters, and it has tangible effects on the safety of communities most at risk for poor health outcomes. We know that during the COVID-19 pandemic, hate crimes against Asian and Pacific Islander individuals have exponentially increased, in no small part due to the stigmatizing, racist and false names that were associated with the virus in early 2020. Beginning in February of 2020, the New York City Commission on Human Rights received a sevenfold increase in reports of anti-Asian hate incidents, ranging from verbal assaults to innocent lives cut short by acts of targeted violence. We fear the consequences due to “monkeypox” related stigma may be exacerbated given that in many contexts, transmission is concentrated among gay, bisexual and other men who have sex with men — a population we know to face ongoing stigma, marginalization, violence and even criminalization.

Words can save lives or put them at further risk; thus, the world cannot repeat these mistakes in nomenclature again.

We are at a critical crossroads of the “monkeypox” outbreak — before understanding and awareness of the virus is spread more widely, but also at a time of increasing transmission where we need to be broadly messaging about primary prevention and risk.

I quoted this letter at length because it seems like such a vivid example of the mindset of the current day: Reality is determined by words, that honest words threaten the marginalized with violence, and asking the marginalized to improve their behavior is unthinkable.