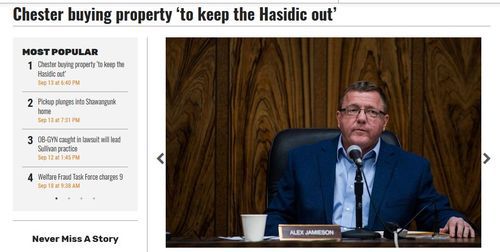 NY Town Recognizes That Demography Is Destiny: "Chester Buying Property ‘To Keep The Hasidic Out’"

The below article about the town of Chester, New York, which is a little over 60 miles north of New York City, is actually an inspirational reminder that people can wake up to demographic threats.

Earlier this year, Chester residents learned that Greens at Chester, the 431-home development being built on a 110-acre site west of the Whispering Hills subdivision, would be a predominantly Hasidic community and could eventually be home to 3,000 people. [NOTE: the current population of the town is around 12,000.]

The news brought hundreds of people to a Town Board meeting, where they urged elected officials to stop the development. At the time, Jamieson told the public the town would explore instituting a ward system for electing Town Board members and adopting an open-space preservation program.

“We made a promise to the people to preserve as much of the town as possible,” Jamieson said. “This is just the first phase.”

In addition to the Sugar Loaf Performing Arts Center purchase, the town is also finalizing a contract to buy a 26-acre property on Route 94 in Chester where Primo Sports originally planned to build a sports complex. The Town Board expects to vote on that purchase at its next meeting, Jamieson said...

Two years ago, Chester voters soundly rejected the town’s plan to issue bonds to buy the Frozen Ropes baseball-softball training complex. This time around, Jamieson predicted, the response will be different.

The town plans to continue buying properties, according to Jamieson. He pointed to available land in the town, including the BT Holding property in the Village of Chester, Johnson Farm on Route 94 and properties owned by the Palmer family along Laroe Road.

This November, the ward system will also be on the ballot. If approved, Town Board members will be elected by district instead of townwide vote, thereby limiting Greens at Chester’s potential political power.

“The idea is to keep the Hasidic out so that they can’t control the Town Board,” Jamieson explained.

There is so much truth in that story that you might be astonished it actually got published. The details of the public reaction and the political response are also stunning. Instead of proclaiming how "diverse" this will make Chester, the public correctly recognizes that an ethnic minority can enter into a new area and quickly take over political control if left unchecked. What is even more shocking is that the politicians seem to actually be listening to their voters instead of lecturing them on being more "tolerant" and "inclusive." As a matter of fact, the political leadership appears to be taking immediate steps to halt any further advancements by the Hasidic community.

The situation involving the Hasidic community of Kiryas Joel in that region of New York might help to explain the rapid public and political reaction to the news that Hasidic Jews are moving into the town en masse. People who live there are aware of how the closely knit Hasidic Jewish community vote as a bloc and reproduce at a much higher rate than the surrounding population which ends up giving them a demographic edge. This inevitably results in the Hasidic Jews increasing their political control and actually just recently led to them carving their own town out of another and creating a strange type of ethno-municipality in upstate New York. [Call It Splitsville, N.Y.: Hasidic Enclave to Get Its Own Town, by Lisa Foderaro, The New York Times, November 19, 2017]

What this teaches us is that the biggest "red-pill" is witnessing something firsthand. These people have learned that demographics is destiny and they're actually doing something about it.