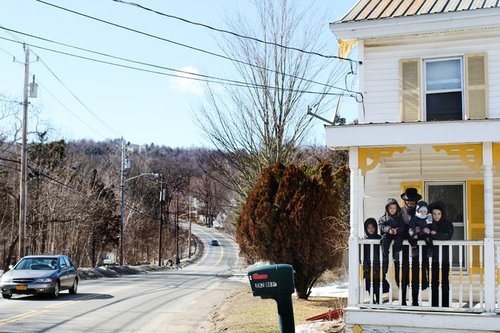 The Real Story Behind the Pine Bush Anti-Semitism Lawsuit

There was much publicity this week when the NYC exurb of Pine Bush paid off millions of dollars to five Jewish families who accused it of allowing students to get away with anti-Semitic doings such as discussing how they were going to celebrate Hitler’s birthday on 4/20. (My guess: by getting wicked high — 4/20 is both Hitler’s birthday and the national dope smoking holiday.)

If you follow the news closely, you will have noticed that the framing of this narrative has revolved around a battle between NY Times reporter Benjamin Weiser, who has acted as a conduit for the plaintiffs, and a host of liberal Jewish reporters, some of them even at the NYT, who have tried to play defense by implying that the lawsuit is an attempt to bully the heavily liberal Jewish local leadership into letting the Satmar Hassidim convert Pine Bush’s village of Bloomingburg into another Kiryas Joel ultra-Orthodox settlement that politically controls the surrounding community through bloc voting.

For example, from the NYT last year:

BLOOMINGBURG, N.Y. — Clifford M. Teich came to this rustic village in the foothills of the Catskills 30 years ago to be a country doctor, an internist who would treat his fellow villagers’ aches and pains, and get to know them as neighbors. He occasionally accepts payment in the form of homegrown onions and tomatoes.

“I wanted to wake up in a small, quiet, quaint village,” said Dr. Teich, 61, who grew up in Westchester County. “People came up here with the intent to live in a place that is rural, not congested, and where everybody knows everybody’s name.”

Now, Dr. Teich and many neighbors are worried that Bloomingburg, which has 400 residents, is about to become a very different place, more like the jostling streets of Brooklyn, more bustling as it becomes populated by Hasidic newcomers. He wants to keep the village what he calls heterogeneous.

A developer, Shalom Lamm, has been granted the right by village boards to build 396 townhouses that seem likely to be bought up by Hasidim. Mr. Lamm argues that Dr. Teich and others who are resisting the development have no right to decide who gets to live in the village. …

“They want to determine the religious and racial profile of every person who moves into land I own,” he said. “Because we live in America, if you determine you don’t like the neighbors, you have a right to move, but if they adhere to the law, you have no right to block them.”

“Substitute ‘black’ for ‘Hasid,’ ” he said, and his opponents would be “horrified” to question his right to sell his townhouses to whomever he wishes.

The controversy took a twist on Thursday when agents with a Federal Bureau of Investigation public corruption squad descended on the village and raided more than 20 properties owned by Mr. Lamm in what opponents of the townhouses said was an investigation into their claims of voter fraud. Mr. Lamm, the opponents have charged, has moved 140 Hasidim into vacant apartments since January in an effort to assure a sympathetic majority on the three-person village board that is up for election on Tuesday. In the last election, just 24 people voted. Mr. Lamm, meanwhile, has gone to court to challenge the petitions of candidates opposed to his development. …

Nevertheless, Hasidim in Brooklyn’s Satmar community have published ads in Yiddish newspapers heralding a new Hasidic community in Bloomingburg with the name Kiryas Yetev Lev, an echo of an incorporated village farther south, Kiryas Joel near Monroe, of 21,350 Hasidim. …

Mr. Lamm said some of his opponents had acted in ways he described as anti-Semitic or, for those opponents who are Jewish, anti-Orthodox. One couple who live next to the development put up a 20-foot wooden cross as a Christmas ornamentation, but it is still there more than 10 weeks later. Mr. Lamm said a dozen protesters had turned up outside Friday night services and hollered profanities at Mr. Lamm, his family and Hasidic worshipers.

Lesleigh Weinstein, who is an opponent of the development and is Jewish, said she “had no problem with that cross” because it was a Christmas symbol. Hyperbolic comments, she said, are “expressions of anger,” no more a generalized stereotype of a group than Mr. Lamm’s accusations of anti-Semitism. His accusations, she said, only stoke anti-Semitism.

The charge of anti-Semitism has a particular resonance in the area because Bloomingburg is in the Pine Bush school district, where three Jewish families in 2012 sued the district for tolerating anti-Semitic slurs, jokes about the Holocaust, and swastikas. Holly Roche, a Jewish woman who leads the largest opposition group, Rural Community Coalition, denies that she or other opponents are anti-Hasidic. …

Opponents like Dr. Teich, who is also Jewish, and Ms. Roche have accused Mr. Lamm of “bait-and-switch” tactics. They say he arranged for a local developer to appear before the village board in 2006 as a “frontman” and promise a gated community of 125 luxury homes with a golf course. … Then, opponents say, Mr. Lamm revised the plan to 396 townhouses with no golf course before getting final planning board approval in 2010. As a sweetener, Mr. Lamm built the village a $5 million wastewater treatment plant.

Denying deception, Mr. Lamm said he challenged opponents to produce a single piece of paper that promises no more than 125 homes. Opponents have not been able to do so. Nevertheless, Dr. Teich, who as deputy mayor supported annexation, said he was verbally told of 125 units several times by the local developer.

“This whole thing has been done through smoked glass,” Dr. Teich said.

But who can remember all these details when the world is so hungry for hate? The best defense is a good offense or at least a claim to be offended.