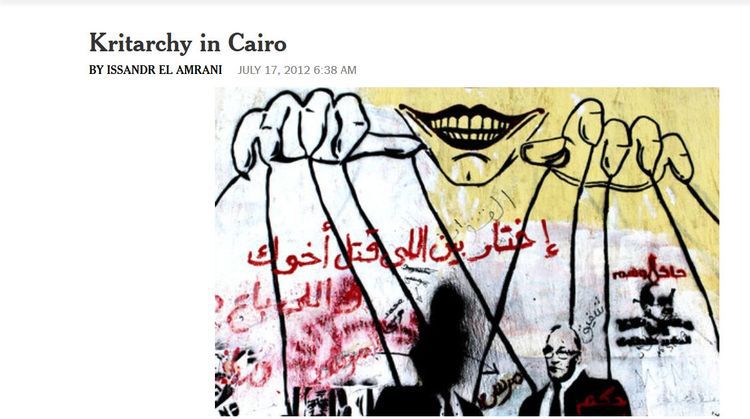 The New York Times's article on the Kritarchy kerfuffle contains a slightly better take on the word "kritarchy" than Buzzfeed and (Ahem!) about fifteen thousand people on Twitter,  but they still quote an ADL guy who says, while it's not historically a bad word, it must be a bad word if we say it.

“Many of the extremists on VDare who use this term are in fact anti-Semites, and they may intentionally be using ‘kritarch’ as a way to express their anti-Semitism, but on its own, the term is not self-evidently anti-Semitic,” [ADL spokesman Aryeh] Tuchman said.

Well, is it Islamophobic? Because I searched the NYT for the word Kritarchy, just wanting to refer to the story above, not spying on their published work in any creepy way, or anything like that, and I discovered that they used it to refer to Muslim Brotherhood judges in post-Mubarak Egypt:

I remember vividly being scolded a decade ago in a special security court by one of Mubarak’s most infamous judges, Abel Abdul Salam Gomaa. I was reporting on a trial in which about 18 Islamists were accused of belonging to a terrorist organization. The evidence was flimsy, and the judge must have picked up on my disgust at the proceedings: he interrupted the hearing to remonstrate me as I sat in the audience. (One defendant in the case, Ian Nisbet, wrote a book about the sham verdict Gomaa issued and the entire ordeal.) Gomaa and his ilk — including Farouk Sultan, recently the head of both the presidential election commission and the Supreme Constitutional Court that dissolved Parliament — have never had to account for sending many individuals to prison on evidence fabricated by the security forces.

Now the standoff between the Muslim Brothers and the military is set to be resolved in various court proceedings, rather than through a political consensus. This makes Egypt’s activist judges a mirror of the theologians they claim to fear, a kind of wilayat al-faqih of establishment secularists or, more plainly, a kritarchy — a system ruled by judges.

A decade ago, the American judge Robert Bork, once a U.S. Supreme Court hopeful, warned that “the rule of law has become confused with — indeed subverted by — by the rule of judges.” Judicial activism is sometimes seen to be an especially American disease, but as Bork has also written, “it is a judicial disease, one that knows no boundaries.”

In discussing that atttack on us by Iranian-American Immigration "Judge" Ashley Tabaddor, I noted that had she read a little further in the Wikipedia page on "kritarchy,"  she would have noted that in addition to the judges mentioned in the Book Of Judges in the Old Testament, there are, or have been, functioning kritarchies in Somalia, Ireland, Iceland, and, arguably, the present-day United States.

And when I say "arguably," real Judge Robert Bork was only one of the many people who have argued this.

However, you also find something like kritarchy in the Muslim world. Not just in Egypt, but in the Ayatollah Khomeini's Iran. One of the saying of the late Ayatollah, quoted in the famous Green Book was:

Islamic justice is based on simplicity and ease. It settles all criminal or civil complaints in the most convenient, elementary, and expeditious way possible. All that is required is for an Islamic judge, with a pen and inkwell and two or three enforcers, to go into a town, come to his verdict on any kind of case, and have it immediately carried out. Look at the present cost in time and money in Western society with all its judicial procedures surrounding any judgment, in the name of principles alien to Islam!