NumbersUSA: A Vote For Cromnibus Will Rate As Vote For Amnesty 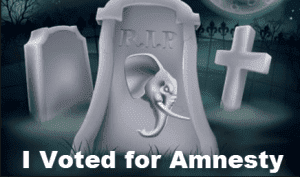 From my perspective, in the current Amnesty battle NumbersUSA has distinguished itself as the most effective of the Fat Cat Inside-the Beltway immigration restraint outfits. Brenda Walker flagged this yesterday in Roy Beck: Don’t Make the Most Vulnerable Americans Pay the Cost of Amnesty

Beck emphasized the central issue regarding the policy’s effect on the American people: The work permits are the amnesty.

Now NumbersUSA has announced an objectively brave step: NumbersUSA to grade CRomnibus vote as a vote for Amnesty

It should be obvious to all Members, as it is to Americans, that Congress cannot in good faith fund an unconstitutional act for any period of time.

DHS should not be the only restricted agency. Unless restricted from doing so:

Their argument is of course unanswerable (except by bribery). But getting on a collision course with the entire leadership of the only slightly patriotic Party in Washington is a radical step for the normally herbivorous NumbersUSA and VDARE.com applauds.