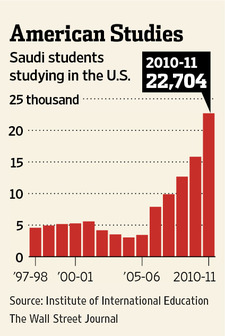 The article below answers a question I’ve been mulling, in particular since a Saudi student was early named as a possible Boston bomber — just how many Saudis are lurking in the nation’s colleges these days?

(Interestingly, the foreigner who was an early person of interest in the Boston bombing investigation, Abdulrahman Ali Al-Harbi, turned out to be a national security threat who would be deported, but then curiously wouldn’t be deported — a disturbing mystery that remains unexplained.)

The graph shown is from last year and doesn’t reflect the new high number of Saudi students: 34,139 enrolled. That figure doesn’t show any who may have dropped out to pursue jihad, a behavior which has been known to happen.

The article below has the relevant numbers but fails to note the origin of the program. Following the 9/11 attack, in which 15 of 19 hijackers were Saudi nationals, Prince Abdullah leaned on his pal President George Bush to allow a scholarship program in America to promote mutual understanding etc., which they agreed upon in 2005. In that year, just 2500 Saudis were studying in the US. The program has been growing like crazy ever since, despite some notable failures, e.g. the Saudi national Khalid Aldawsari who was convicted last June of plotting a bomb attack in west Texas. He had come originally as an engineering student to Texas Tech on a generous Abdullah scholarship.

Remember, President Obama was determined to gut the Second Amendment “If there’s even one life that can be saved” but the clear danger of Muslim immigration, not so much. Liberal America has priorities, and public safety is not one of them.

(CNSNews.com) – The number of Saudi Arabian students in the United States has increased by more than 500 percent since Sept. 11, 2001–when Hani Hanjour, a Saudi national who came here on a student visa flew American Airlines Flight 77 into the Pentagon, killing 189 people.

According to the Institute of International Education–whose numbers on foreign students in the United States are used in official reports published by the U.S. Department of Education–there were 5,579 Saudi nationals enrolled in U.S. institutions of higher education in the 2001-2002 school year. The Sept. 11, 2001 terrorist attacks took place near the beginning of that school year.

In the 2011-2012 school year, the most recent year for which data are available, there were 34,139 Saudi nationals enrolled in institutions of higher education in the United States.

The 34,139 Saudi Arabian students in the United States for the 2011-2012 school year was more than the total of 30,256 undergraduate and graduate students enrolled in the University of Connecticut this school year.

That is an increase of more than 500 percent.

Hani Hanjour, the Saudi national who flew American Airlines Flight 77 into the Pentagon on Sept. 11, 2001, came to the United States on a student visa, according to the 9/11 Commission Report.

“Hani Hanjour, from Ta’if, Saudi Arabia, first came to the United States in 1991 to study at the Center for English as a Second Language at the University of Arizona,” said the 9/11 Commission Report. “He seems to have been a rigorously observant Muslim. According to his older brother, Hani Hanjour went to Afghanistan for the first time in the late 1980s, as a teenager, to participate in the jihad and, because the Soviets had already withdrawn, worked for a relief agency there.

“In 1996,” according to the report, “Hanjour returned to the United States to pursue flight training, after being rejected by a Saudi flight school. He checked out flight schools in Florida, California, and Arizona; and he briefly started at a couple of them before returning to Saudi Arabia. In 1997, he returned to Florida and then, along with two friends, went back to Arizona and began his flight training there in earnest. After about three months, Hanjour was able to obtain his private pilot’s license. Several more months of training yielded him a commercial pilot certificate, issued by the Federal Aviation Administration (FAA) in April 1999.”

He then went to Afghanistan and trained in an al Qaeda camp.

“On June 20, (2000), Hanjour returned home to Saudi Arabia,” said the report. “He obtained a U.S. student visa on September 2 and told his family he was returning to his job in the UAE. Hanjour did go to the UAE, but to meet facilitator Ali Abdul Aziz Ali.

“On December 8, Hanjour traveled to San Diego,” said the report. “His supposed destination was an English as a second language program in Oakland, California, which he had scheduled before leaving Saudi Arabia but never attended.”