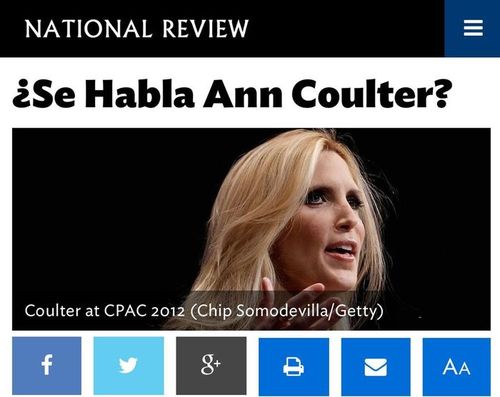 Took them long enough (though this was also featured in the July 6 print edition.) It's an odd piece, not least because it describes Ann Coulter _as if we don't know who she was.

From the subtitle, a person might think this book is a crazy rant, and there are crazy-rant touches, for Coulter writes flamboyantly. But this is a serious book making serious points.

Left out of this trip down memory lane is the fact that Ann Coulter used to write for National Review before they had one of their characteristic failures of nerve and fired her. This is what led to her memorable characterization of them as "girly boys."

Nordlinger at least recognizes the political implications of the utterly unnecessary demographic changes forced on our country.

The demographic transformation of California is stunning (and cautionary). It has important political implications, among others. Does anyone think that Ronald Reagan, for all his skills, could get within a mile of the governorship in today’s California?

Some Democrats have been open — gleefully open — about what mass immigration means for their party’s fortunes.  Coulter cites a few of them, including one who exults in “McGovern’s re­venge.”

And therefore... what? Nordlinger doesn't really follow where this leads. Instead, he calls himself an "immigration restrictionist, but sometimes wincingly so." He tells us to read Coulter but also to read Jeb Bush and the Wall Street Journal because "they are conservatives on the other side." And the whole piece has this detached, casual tone as if the reviewer is entertained by Coulter's "characteristic aplomb — or outrageousness" but isn't really taking the whole thing seriously, even after he concedes the point that Ronald Reagan could never be elected to office in California today.

That's the Beltway Right for you. There's a slowly dawning awareness immigration threatens to make it (and the United States of America) a relic of the past. And yet the characterization of the conservative movement outlined by the late Joseph Sobran remains true. "It's a game, a way of making a living." For Conservatism Inc., immigration is still not as important as the Export-Import Bank.