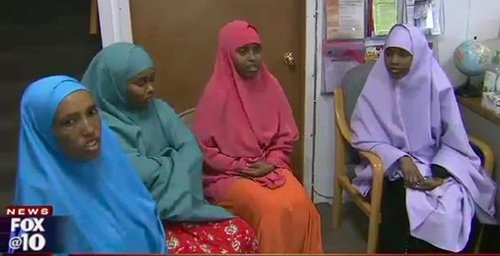 Recently, in calling for importing more Somalis into St. Cloud, Minnesota, the Democratic governor Mark Dayton announced, “Our economy cannot expand based on white, B+, Minnesota-born citizens. We don’t have enough.”

A Global Chill in Commodity Demand Hits America’s Heartland In China and other emerging markets, growth is waning and demand for the raw materials that drive the global economy has dried up.

A thousand miles south of Granite City, Ill., a gritty steel town on the Mississippi River, West Texas oil rigs have shuddered to a halt. Seven hundred miles north, mines in the Iron Range of Minnesota have been stilled. …

Granite City may be waiting, but a chill in economic activity is already evident across a broad swath of the nation’s heartland stretching from the Gulf of Mexico to the Canadian border, as prices of commodities sink.

Whether it is roustabouts and other oil field workers in Texas and North Dakota, miners in Minnesota, farmers in Iowa, or heavy equipment makers and sellers in Illinois, the reason for the fear is the same: a sudden plunge in demand for commodities.

The fall in prices for a variety of products, including crude oil, iron ore and agricultural crops like corn and soybeans is reminiscent of the collapse of the technology boom in 2000 or the bursting of the housing bubble nearly a decade ago.

… Sparsely populated North Dakota, where fortunes soared with the shale oil fracking boom, has lost more than 10,000 jobs, with some of its hastily built new housing now empty.

For the farm belt, which largely sidestepped the damage wreaked by the financial crisis and the Great Recession, the economic turnabout has been especially sharp. The Agriculture Department forecasts that farm income, adjusted for inflation, will fall 54 percent from where it was two years ago — the third-lowest level since the 1980s. Corn, the most valuable crop in the country, has fallen to $3.78 a bushel from $7.50 three years ago. …

Commodity producers are used to regular booms and busts, but the so-called supercycle driven by China’s once insatiable appetite for raw materials has been extraordinary by any standard. Edward L. Morse, Citigroup’s global head of commodities research, likens China’s boom to the three decades after World War II when Europe was rebuilt, or the Gilded Age industrialization of the United States in the half-century after the Civil War. …

For all the economic suffering elsewhere, the farm sector came through the Great Recession largely unscathed. Harvests were bountiful, prices for corn and soybeans were buoyant, and low interest rates made it easy to borrow and buy land or new equipment. …

“At $3.50 a bushel, if your land is paid off, you’re probably making a little bit of taxable income,” said David Miller, the director of research and commodity services for the Iowa Farm Bureau Federation. If you’re renting land at $300 an acre, he said, “you’re probably losing money.”

Governor Dayton better order up so more Somalis fast to fix the Minnesota economy. That is how supply and demand works, right?

By the way, when Raj Chetty’s big “Equality of Opportunity” study of income mobility by county from 1996-2012 reports that the 25 best counties in the U.S. are all on the Great Plains, such as number one-ranked Sioux County, Iowa (where farmland reached the $20,000 per acre milestone in 2013), he doesn’t get that that’s an artifact of this Chinese Supercycle that now appears to be winding down. In the near-future, some other, as of yet-unknown, type of counties will likely do amazing well for awhile, just as windswept Great Plains counties did over the course of Chetty’s study.