Earlier, from 2015: George Soros Funded 2006 Amnesty Rallies And Now Ferguson Riots. What Next? 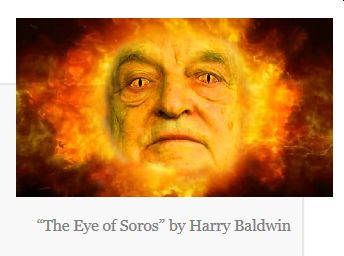 The Open Society Foundations, the philanthropic group founded by the business magnate George Soros, announced on Monday that it was investing $220 million in efforts to achieve racial equality in America, a huge financial undertaking that will support several Black-led racial justice groups for years to come.

The initiative, which comes amid national protests for racial equality and calls for police reform ignited by the killing of George Floyd in Minneapolis, will immediately reshape the landscape of Black political and civil rights organizations, and signals the extent to which race and identity have become the explicit focal point of American politics in recent years, with no sign of receding. Mr. Soros, who has at times faced smears and anti-Semitism over his role as a liberal megadonor, is also positioning his foundation near the forefront of the protest movement. …

“There is this call for justice in Black and brown communities, an explosion of not just sympathy but solidarity across the board,” Mr. Gaspard said. “So it’s time to double down. And we understood we can place a bet on these activists — Black and white — who see this as a moment of not just incrementalism, but whole-scale reform.”

… “The calls have been emotional, she said, as groups that have long felt marginalized by mainstream philanthropy find out their work will be sustained and supported. …

That seems to imply that some of these groups are dubious fringe operations that other liberal philanthropists have shied away from being involved with.

In recent years, Mr. Soros has become a favorite target of some conservatives and right-wing groups, which have sometimes used anti-Semitic tropes to try to recast his giving as an effort to seek world influence.

Between the local grants and the millions for Black-led organizations, however, Mr. Soros and his foundation have helped answer the question of whether the social justice groups that have dominated the current moment are here to stay.

Alexander Soros, who serves alongside his father as the deputy chair of Open Society, said in a statement that the new investment was a response to a time “for urgent and bold action.”

“These investments will empower proven leaders in the Black community to reimagine policing, end mass incarceration and eliminate the barriers to opportunity that have been the source of inequity for too long,” he said.

By the way, perhaps the most important local election this fall will be the Los Angeles County (population 10 million) district attorney race where Soros money is backing the white male challenger to the black woman incumbent Jackie Lacey. Why? Because Lacey doesn’t like crime.

Los Angeles has had some successes in recent years in fighting crime: not New York in the 1990 home runs, but better than you might expect.

Back in March, a Black Lives Matter mob invaded Lacey’s porch in the wee hours of the morning and her husband waved his gun around to get them to back off: