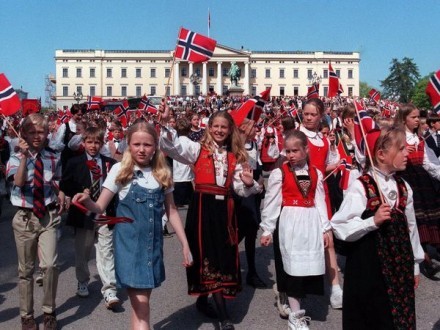 Further to Brenda Walker’s depressing blog Norway: Future Islamization Is Calculated, I see our old friend The Irish Savant has posted Oslo: Nirvana to den of crime in one generation  (stupid Blogger software censorship attempt may be safely ignored):

Oslo now is nearly 30% ‘visible minority’, mostly Somalis, Pakistanis and Nigerians. What a selection!. Twenty years ago this percentage was virtually zero. No breakdown by age cohort is available, but given that those latter ‘cultural’ groups seem to have about 10 children per female, while Norwegians have about two, you don’t have to be Einstein to see what’s going to happen.

The blog reports graphic specifics supplied by a Norwegian lady:

Personally I never go into the center of the city unarmed anymore.

This is a Crime against Humanity. The population of Norway is one of the wonders of the world. Even Martin Luther King approved!

Slightly cheering from a VDARE.com point of view is comment #2 by Franz:

Funny that the Scandinavians gave a Nobel prize to Milton Friedman but never bothered to listen to what the man had to say:"It's just obvious that you can't have free immigration and a welfare state."

Eliciting this comment from Milton Friedman in a 1997 Forbes interview has been one of the high points of Peter Brimelow’s career, vying in importance with his proposed definition of “racist”.