North Texas Is a Command Center for Mexican Drug Gang

From Dallas comes news that the city is being used as a main office by the La Familia Mexican drug cartel. The location is a natural for Mexican drug smugglers to use because of the major highway I-35 running from Laredo on the border to Dallas all the way through the center of America and reaching Duluth on Lake Superior.

Some Dallas residents have been shocked to learn that Mexican organized crime has moved into nice houses in their suburbs. It’s another failure of border enforcement, obviously. Plus, Mexicans are everywhere in Texas, so Spanish-speaking entrepreneurs in the neighborhood would not be that unusual. Mexican cartels benefit hugely by having a sea of US-residing Hispanics in which to swim.

Dallas authorities shouldn’t be too surprised however. In 2005 a major north Texas drug bust caused a DEA agent to observe, “Dallas is the new Miami for transiting drugs.” 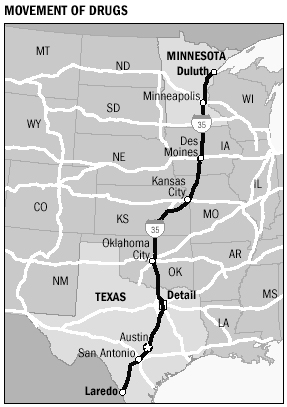 Should Dallas residents be concerned that a drug war might blow up in their city from some other gang trying to take over the territory? Mexicans treat the US like it’s their turf, so it wouldn’t be surprising if they act the same way they do at home. Mexican gangsters already are fighting over territory in Chicago.

Drug Cartels Running Command and Control Operations Out of North Texas, NBC Dallas Fort Forth, May 17, 2013

Trouble came rolling into town and landed squarely in one Seagoville neighborhood.

One neighbor told NBC 5 Investigates he saw federal agents surround a neighbor’s home and then, a short time later, carry out bags full of cash.

The men that lived at the home were not your average street-level drug dealers.

The current residents of the house showed NBC 5 Investigates a crawlspace hidden in a back closet where the DEA said the cartel hid drugs and money.

According to recently unsealed court records obtained by NBC 5 Investigates, prosecutors say they were members of a high-level cell of La Familia, a violent Mexican drug cartel.

For the Drug Enforcement Administration, the case was one example of a dramatic change they’ve seen in Dallas over the last six years.

Cartels now send trusted members to North Texas to set up what the DEA calls “command and control,” directing drug shipments from Dallas to cities all over the country.

“You name it. There’s no city limits sign for these guys. Wherever they can fit in, they’ll move in, sometimes as normally as a normal family,” said Daniel R. Salter, the acting special agent in charge of the Dallas DEA office.

“It’s alarming to us to think they would bypass cities they used previously, because we weren’t exactly ready for it,” said Salter.

Recent investigations have led agents to suburbs including Carrollton and Duncanville. Agents have uncovered ranch properties used by cartels in rural areas on the edges of the Metroplex.

The DEA snapped surveillance photos of one cartel meeting outside the Harry Hines Bazaar in Dallas and they found one operative working from a home in Felicia Wilson’s neighborhood in Richardson.

Fred Burton is a former state department counterterrorism agent. He’s tracked Mexican cartels in the past when he worked for the Texas Department of Public Safety. Now he works for Stratfor Global Intelligence, a security firm in Austin.

Burton said the cartels are attracted to Dallas by the same things that attract many major companies — including a highway network with easy connections to points across the country, and Dallas has become an essential place that cartels have to control to run their business effectively.

“I think, from a geography perspective, they pretty much have to own that territory if they’re going to have an effective distribution network,” said Burton.

“It’s very interesting. Very profit motivated, just like a business organization. The only aspect that’s different is its fully criminal activity and can be very violent,” said Sarah Saldaña the United States Attorney for the Northern District of Texas. Saldaña’s office has already won convictions of more than 160 people tied to La Familia alone.

But when one cartel cell is shut down, another often pops up.

“We’re not breathing easily. We’re still going with our investigations and trying to make sure we’re getting as many as we can,” said Saldaña.

And they never know where they may turn up.

There has been one shooting in Dallas involving a suspected cartel hit-man. Cartel kidnappings have been reported in the border region of Texas. But the victims have also had ties to the cartels.

Prosecutors want to stay on top of this so it doesn’t reach a point where ordinary people end up in the middle of it.