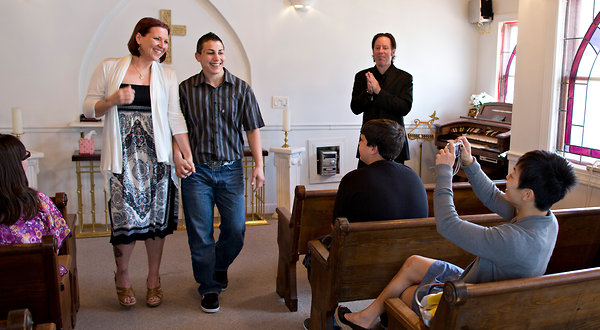 From the New York Times, an article on a U.S. Olympic wrestler getting married.

Becoming an Olympian, and Then a Newlywed

It took me awhile to figure out what the point of this article was that demanded national coverage. Don't jocks get married all the time? Is it surprising that wrestlers tend to be short (to help make their weight class) and dress jockishly even at their weddings? And who cares enough about amateur wrestling to be interested in some wrestler dude's private life?

Oh, wait, it's a Man Bites Dog article! Or, to be precise, Woman Bites Woman.

See, the Olympic wrestler is a woman, so it's a heartwarming Gay Marriage story, which of course needs to be promoted by the Newspaper of Record. (Who knew that women's wrestling was now part of the Olympics?)

And pushing gay marriage overrides even the prime directive of Wiping Out Stereotypes, since the wrestler gal looks like me and Plato got together over a few drinks to dream up the Platonic Ideal of the woman amateur wrestler.

Why does the Summer Olympics keep mindlessly replicating for women macho sports that appeal to a negligible fraction of females? In contrast, the Winter Olympics introduces swoopy new sports that more than a few women actually like, such as Snowboard Cross (here's video of the hilarious 2006 women's final), events in which women can do things they like (such as, go fast elegantly and show off, all while wearing this winter's most fashionable sports attire).

But my view that women's sports should try harder to include sports that many women would like is despicably extremist compared to the dominant push to prod a few women into competing in each and every macho sport ever invented by men for men. Where's women's sumo wrestling?

I wouldn't be surprised if someday it will become a national priority to spend a trillion dollars to build a time machine for the express purpose of going 800 years back into medieval times and establishing a Ye Olde Fair Maiden's Jousting League just so the past won't be tainted by the sexist fact that only men jousted. How can we live knowing that in 1212, there must have been some woman somewhere who wanted to joust and couldn't?