No Match-Up between Agenda of President vs. Public 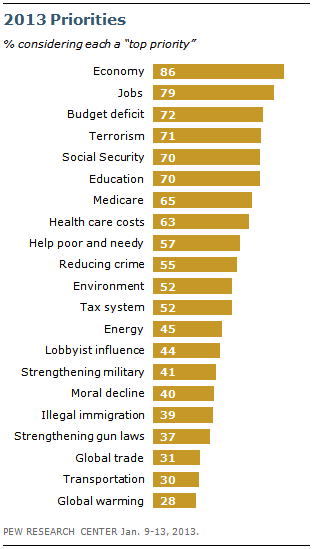 Funny, but President Obama’s policy priorities don’t correspond at all with what the voting public wants fixed. American citizens want the economic mess cleaned up, in particular by increasing the number of jobs and decreasing the deficit.

That was the common-sense result of recent polling from Pew Research. The paper, released January 24 and titled Deficit Reduction Rises on Public’s Agenda for Obama’s Second Term, surveyed various concerns of the American public. The topic “dealing with illegal immigration” (a pretty squirrelly expression that could encompass both sides) is far down the list. Perhaps the public has no faith in Washington not to make the problem worse.

In addition, the top problems (economy, jobs, budget deficit) would all be made worse by a mega-ton comprehensive amnesty for illegal alien job thieves.

Interestingly, the President’s short list is quite different from that of the little citizens, as noted by George Stephanopoulos in his ABC News blog:

On Monday, President Obama shared his vision for the next four years with the nation in his second inaugural address. In the speech the president laid out an ambitious agenda for the next four years and there’s been a lot of talk about how much can actually be accomplished. He touched on a series of issues including climate change, immigration reform, economic inequality and gay rights- becoming the first president in modern history to talk about gay rights in an inaugural speech. Many of you had questions about the president’s speech and also about what we can expect in the second Obama term.

Obama’s favorite issues are chosen to please his far-left base and to give Marxist historians material for adulatory books.