No First Amendment for You, Whitey: Miami-Dade Fire Captain Who Criticized Trayvon Martin Hoax is Busted All the Way Down to Fireman, 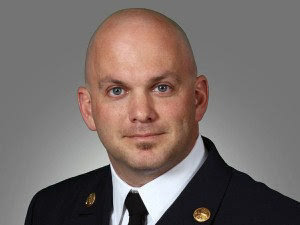 Just as a formality, I googled under “Captain Brian Beckmann” and “Nat Hentoff,” “Megan McArdle,” and “ACLU,” and even checked the ACLU’s national Web site, and under its Florida affiliate. Not one example of a civil libertarian individual or organization defending Brian Beckmann came up.

Are there any other fake civil libertarians I should have checked under, like Ron and Rand Paul, et al.?

I have heard of black public officials and uniformed service personnel making outrageously racist public statements, and never being punished for them, but have repeatedly heard of white men being punished and even cashiered for much less.

The second most important lawsuit I can think of would be one challenging the constitutionality of all diversity training in public institutions as violating whites' First and Fourteenth Amendment rights, and their legal rights under the 1964 Civil Rights Act. The third most important lawsuit would challenge all diversity training in private institutions as violating whites' legal rights under the Civil Rights Act, which applies to the private as well as the public sphere.

The most important lawsuit? That would challenge the legality of "Barack Obama's" 2008 candidacy and thus continuing occupation of the White House.

The death of free speech in America (Florida Cracka's title)

A Miami-Dade fire captain who blasted the handling of the Trayvon Martin case in a Facebook rant has been demoted.

A Miami-Dade fire captain has been demoted down to firefighter as punishment for a rant, posted on his personal Facebook page, about the Trayvon Martin case, county officials said Monday.

In the post, Beckmann suggested “urban youth” are the products of “failed, sh—bag, ignorant, pathetic, welfare dependent excuses for parents.”

He also brought his fellow firefighters into the post, saying: “I and my co-workers

could rewrite the book on whether our urban youths are victims of racist profiling or products of their failed, sh—bag, ignorant, pathetic, welfare dependent excuses for parents, but like Mrs. Corey, we speak only the truth.”

It ended with, “They’re just misunderstood little church-going angels and the ghetto hoodie look doesn’t have anything to do with why people wonder if they’re about to get jacked by a thug.”

A screen shot of the Facebook page was sent to Miami-Dade Fire Rescue’s human resources department on April 12, according to county records released Monday. A day later, it was published on the website theGrio.com, an African-American news website.

The ensuing investigation found that, though Beckmann’s Facebook page was personal, it hurt the public’s trust in the department, the disciplinary action report said. “While the opinion posted may have been personal, as a captain with Miami-Dade Fire Rescue, it greatly disrupted the public’s confidence in our entire organization as a result of the reference to ‘my co-workers,’ ” it said.

Beckmann will be on administrative leave and must complete a psychological evaluation and diversity training before he returns, said Rowan Taylor, president of the Miami-Dade firefighters union. And when he does come back, it will be at the lower rank of firefighter.

Taylor said an appeal already had been filed. The appeals process will likely take several months.

[A tip o’ the fireman’s axe to The Gaslamp Post.]