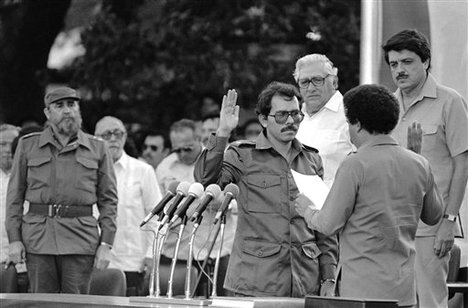 Nicaragua has sent thousands of Cubans back to Costa Rica after the US-bound migrants stormed the border, accusing San Jose of sparking a crisis. Cuban influx fueled by rumors US will reverse its liberal asylum policy.

Nicaragua closed its border with Costa Rica Sunday, blocking hundreds of Cubans headed for the United States and stoking diplomatic tensions over a growing wave of migrants trying to reach the US.

There has been a recent surge in Cubans seeking to reach the US since relations have begun to normalize between Washington and Havana. The warming of ties has raised sparked rumors that the US would likely end its liberal policy of granting residency to Cuban immigrants arriving overland.

Here is an opportunity for the Cuban Connection GOP presidential candidates — Rubio, Cruz, and Jeb — to show some genuine leadership and call for immediate abolition of Cubans’ dry foot – wet foot immigration privileges before the upcoming Cuban Camp of the Saints gets fully in gear.

In many ways, the scenes have parallels to Europe’s refugee crisis as refugees fleeing war, poverty and strife transit impoverished Balkan countries on their way to prosperous European countries like Germany and Sweden. …

The smuggling gang had arranged for Cubans to fly to Ecuador before working their way up through Colombia and Panama. Now many are stuck on the Costa Rica-Nicaragua frontier trapped amidst a diplomatic stalemate.

I’m not sure exactly what Ortega’s strategy is here. (Do the Castros want to keep Cubans bottled up, or are they planning Mariel II?). But Ortega’s an interesting man, a political survivor.

In recent years as president of Nicaragua, for example, he’s developed a fairly novel strategy of exciting nationalist passions over petty border squabbles with neighbors, taking the cases to an international court, and then punctiliously obeying the judgments. It’s kind of like as football is to war, which could be a good thing.