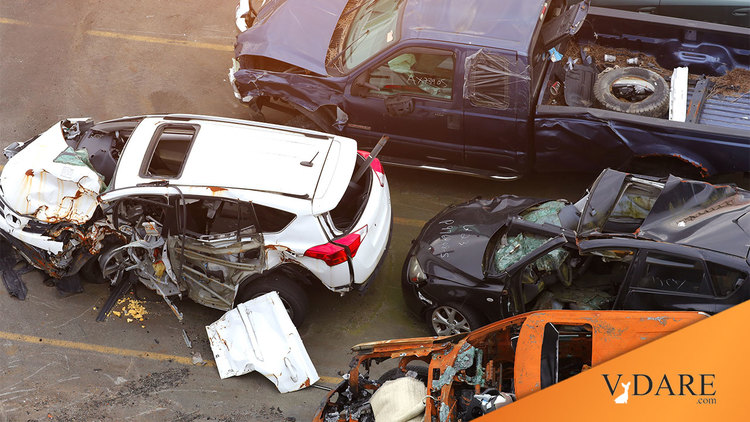 Back on January 12, 2022, I counted up 2021 traffic deaths in 30 states and found that their residents died 17% more on the roads in 2021 than in 2019 (before COVID and the racial reckoning), or 20% more per million miles driven. Now the government has gotten around to issuing an official report finding much the same thing, except it only covers through September 30, 2021. (As I’ve been complaining, we need faster data to show the Establishment when they’ve made fatal errors.)

The U.S. Department of Transportation’s National Highway Traffic Safety Administration released its early estimate of traffic fatalities for the first nine months of 2021.

You can read the full PDF here.

NHTSA projects that an estimated 31,720 people died in motor vehicle traffic crashes from January through September 2021, an increase of approximately 12% from the 28,325 fatalities projected for the first nine months of 2020.

This is down from an earlier 18% increase comparing the first six months of 2021 to the first 6 months of 2020. This is because the first couple of months of 2020 were the Old Normal, before all the craziness started. In summary, 2021’s traffic death toll is pretty much more of the New Normal that emerged after COVID and George Floyd.

The new estimates come days after the U.S. Department of Transportation released the federal government’s first-ever National Roadway Safety Strategy, a roadmap to address the national crisis in roadway fatalities and serious injuries.

Making long term improvements in road infrastructure to reduce traffic deaths is good, but infrastructure is not related to the sudden rise in lethally bad driving over the first half of 2020, which was clearly driven by the two specific events: the pandemic and the racial wreckening. The biggest change was a huge decline in traffic stops by the cops. The good news is that you can actually change that fast.

“This is a national crisis. We cannot and must not accept these deaths as an inevitable part of everyday life,” said Transportation Secretary Pete Buttigieg. “The good news is we now have a strategy, as well as the resources and programs to deliver it, thanks to the President’s Bipartisan Infrastructure Law. The National Roadway Safety Strategy is America’s first-ever national, comprehensive plan to significantly reduce deaths and injuries on our roads.”

We can’t let a crisis go to waste. Let’s spend hundreds of billions on construction on a venerable wish list rather than tell the cops to get out of the donut shop and issue more traffic tickets.

Personally, I wouldn’t mind some traffic infrastructure spending. I can think of two spots in my neighborhood that could use stoplights. But the point is that The Conversation about this sudden surge in traffic deaths is being hijacked by vested interests and nobody is talking about the real reason fatalities are up.

“We have to change a culture that accepts as inevitable the loss of tens of thousands of people in traffic crashes,” said Dr. Steven Cliff, NHTSA’s Deputy Administrator. “This will require a transformational and collaborative approach to safety on our nation’s roads.”

The first thing to do to change the culture is to be honest about why traffic deaths, especially black traffic deaths, are up: it’s the Ferguson/Floyd Effect. Here’s a graph from the NHTSA’s PDF:

These are total fatalities, not per mile. You can see that they drop during recessions when marginal drivers can’t afford cars. There have been two periods of big increases:

Back to the press release:

… According to the Federal Highway Administration, vehicle miles traveled in the first nine months of 2021 increased by about 244 billion miles, an 11.7% increase from the same time in 2020.

The fatality rate for the first nine months of 2021 increased to 1.36 fatalities per 100 million vehicle miles traveled, a marginal increase from the projected rate of 1.35 fatalities in the same time in 2020. However, the fatality rates in the second and third quarters of 2021 declined compared to 2020.