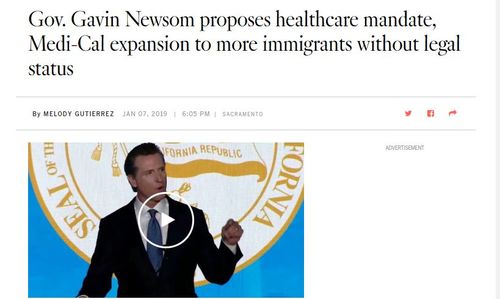 Newsom And De Blasio's "Medical Care For Illegals" Schemes Constitute "Bringing In And Harboring" Aliens. They Should Be Arrested

Recently the newly inaugurated Governor of California, Gavin Newsom and New York City Mayor Bill de Blasio both announced that they will provide a medical insurance program for adult illegal aliens. Both jurisdictions had previously provided such benefits to illegal alien minors. Such acts are illegal.

While it is not illegal (and may even be mandatory) to provide emergency medical treatment to illegal aliens, it is illegal to provide illegal aliens with a benefit program that encourages them to enter or to remain in the United States.

Such medical insurance programs do both, encourage new illegal immigration and encourage illegal aliens already present to remain in the United States. This is a violation of Title 8 United States Code Section 1324, Bringing In And Harboring Certain Aliens, specifically sections (iv) and (v).

Newsom went even further in terms of inducement, offering California as a sanctuary to any illegal alien.

California’s new governor is promising the most populous state will be a “sanctuary to all who seek it” in a direct affront to President Donald Trump’s immigration policies.

Democratic Gov. Gavin Newsom challenged the Trump administration repeatedly as he was sworn in to office Monday, particularly on immigration.

[California Governor Newsom Vows ‘Sanctuary To All Who Seek It’ In Inauguration Speech, by Associated Press, KCAL, January 7, 2019]

Then in one of his first official acts, he extended welfare benefits to illegal alien adults in California, including the illegal alien who killed a police officer and those illegal aliens who tried to help him escape.

Gov. Gavin Newsom announced sweeping proposals to tackle the state’s healthcare needs shortly after taking office on Monday, outlining a dramatic Medi-Cal expansion that would cover young immigrant adults who are in the U.S. illegally, require that all consumers in the state carry health insurance and increase subsidies for middle-class families to help those who need it.

While 8 USC 1324 is not a specific intent crime, it is a general intent offense, Newsom provided the public confession and the unneeded specific intent to commit the crime by his public announcement that California will be a “sanctuary”—such specific intent is often useful to aid a jury to vote to convict.

Fortunately, Sacramento, California’s capital, lies within the United States Attorney’s Office for the Eastern District of California, where the U.S. Attorney, McGregor Scott is an actual Republican. And that Judicial District encompasses the most Republican counties of California providing an excellent jury pool for likely conviction.

Similarly, the execrable Bill de Blasio is following suit on aiding illegal aliens to remain in his jurisdiction.

New York City Mayor Bill de Blasio on Tuesday announced plans to launch “the largest, most comprehensive plan in the nation” to guarantee health care coverage for all city residents, including those in the country illegally.

The Democrats have declared war on President Trump, introducing an impeachment motion. This calls for similar action. President Trump’s first response should be arrests and indictments of local and State officials who illegally aid illegal aliens. And starting with Newsom and de Blasio is a shot across the Democrats bow. President Trump threatened to come out hard against a politicized impeachment effort, it is time he fulfilled a threat.

Time for the indictments and arrests of the Democrats to begin. It was an option to President Trump early in his administration. It is not too late; arrests are even more important now.