In August 2007, three college students who were hanging out in a schoolyard were brutally attacked and shot to death by six MS-13 gangsters. Another young woman managed to survive, despite her terrible injuries, which have left her with facial paralysis to this day. The two women were raped and hacked with machetes.

See my report on the first trial First Newark Schoolyard Trial Gets Conviction.

One man, Melvin Jovel, confessed to being the only shooter, and he was sentenced to life in prison.

Of the six young men who authorities say set upon a group of college friends behind a Newark schoolyard, fatally shooting three execution-style and leaving the fourth badly hurt, only one pulled the trigger.

The admitted gunman, Melvin Jovel, 21, was sentenced this morning to three consecutive life terms in prison plus 20 years.

Jovel had pleaded guilty in September to three counts of murder, one count of attempted murder and weapons charges in the Aug. 4, 2007 attack behind Mount Vernon School.

Jovel said he alone shot in the head Terrance Aeriel, Iofemi Hightower and Dashon Harve. Moments later, he walked over to Natasha Aeriel, Terrances sister, and shot her in the head. Only Natasha Aeriel survived.

He tried to take my life. I dont even know what to say, Natasha Aeriel said in court, before Superior Court Judge Michael L. Ravin imposed his sentence. Aeriel, now 22, made several prayer readings and said she even thanked Jovel for allowing me to get closer to Christ.

She added, he tried to take my life. I dont even know what to say.

Jovel, who listened through a Spanish translator, said little except to tell the judge that one of the other co-defendants, Rodolfo Godinez, sentenced in July to identical counts, had nothing to do with the killings.

While noting that by pleading guilty Jovel spared the victims families another trial, Judge Ravin said he did not believe that was the defendants motivation. Ravin said of the defendant, He was the slaughterer. He was the executioner.

The brutality of the killings – Hightower and Natasha Aeriel were sexually assaulted and attacked with a machete – shocked the city and became a rallying cry for community groups and Mayor Cory Booker to end the gun violence that has plagued Newark for years.

The six defendants are said to be affiliated with MS 13, a violent Central American street gang.

Jovel is the second defendant to be convicted in the killing. Ravin had sentenced Godinez on the same counts, which under New Jersey law, adds up to 245 years in prison. A jury found Godinez guilty on all charges at his trial in May.

The current AP story about the sentencing notes that Jovel is an illegal alien, a fact that was strongly hinted in his first court appearance where he swore innocence:

Jovel, who is from Honduras, told the judge he does not have a Social Security number or a green card, but his immigration status remains unclear, prosecutors said. A U.S. passport was found among his belongings when he was arrested Sunday night, but officials are still trying to determine whether the passport is valid, Assistant Essex County Prosecutor Thomas A. McTigue said. Federal authorities have placed a detainer on Jovel because his status is uncertain, McTigue said.

Immigration and Customs Enforcement officials participated in Jovels arrest, and a spokesman for the agency said it becomes involved when they suspect a person is in the county illegally. 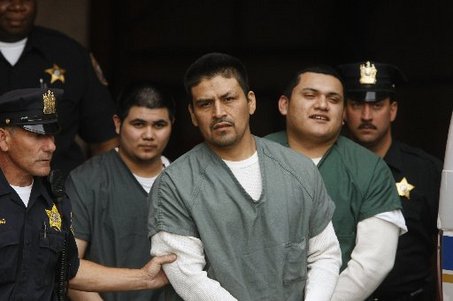