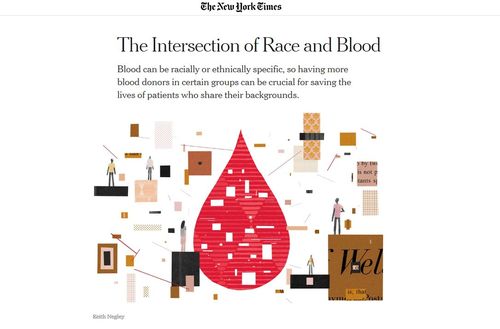 NEW YORK TIMES: "The Intersection of Race and Blood"

From the New York Times, a good piece explaining the often nonobivous reasons that racial ancestry is a big deal in blood transfusions:

The Intersection of Race and Blood

Blood can be racially or ethnically specific, so having more blood donors in certain groups can be crucial for saving the lives of patients who share their backgrounds.

I didn’t know what to say to this, not least because it had been said by the head of donor services at England’s National Health Service Blood and Transplant. The interview was for a book I was writing on blood, a topic I knew a little about by then, but the baldness of his statement still shocked me. Surely we’re all the same under the skin?

… While no one is suggesting forced segregation of blood bags, it’s now scientifically established that blood can be racially or ethnically specific.

Most people know about the eight major blood groups: A, B, AB and O, each of which can be positive or negative (the Rh factor). These are determined by genes, and what group you are depends on what combination of proteins and sugars — antigens — are on the outside of your red blood cells. The International Society of Blood Transfusion lists 360 known antigens, but the combinations are infinitely more. …

A successful blood transfusion relies on sameness. If incoming blood has an antigen that you lack, your body can react badly to it. … Patients who need regular blood transfusions — those who have sickle cell disease, thalassemia or leukemia, for example — may face an ever decreasing pool of suitable blood because they keep creating antibodies.

Wouldn’t it be easier if all our blood was the same? Blame bugs. Much of the variance “has been driven by evolutionary selection by bacteria, malaria and parasites,” says Connie Westhoff, executive scientific director at the National Center for Blood Group Genomics at the New York Blood Center. …

Sickle cell trait is now known to protect against malaria, which is why sickle cell, a painful and debilitating disease caused by malformed blood cells, is found frequently — but not only — in people with African heritage, because malaria thrives in Africa.

… In a diverse population like that of the United States, finding a matched donor becomes more challenging for a patient with a mixed ethnic background.

“Let’s say you have someone with African roots and someone from Asian descent coming together, and then they have an offspring of mixed ethnicities,” Dr. Madbouly said. “You have an African HLA and an HLA type common in Asian areas coming together to form a new type of HLA that is not common in either.”

Though Be the Match added nearly two million donors to its registry last year, only 30 percent were what Dr. Madbouly calls “diverse.” That’s not enough.

… Sickle cell disease is predominantly found in African-Americans, and thalassemia among South Asians, and both conditions require precisely matched blood. But there is a shortfall between ethnic minority patients who need blood, and ethnic minority donors. In New York, Caucasians are 35 percent of the population but 58 percent of donors. Twenty-eight percent of New Yorkers are African-American but only eight percent of donors, and that’s after five years of hard work and outreach by the New York Blood Center with its PreciseMatch campaign.

Even so, there was trouble when the Blood Center began in 2009 to offer the option to “self-declare” ethnicity on its donor forms. This was efficient: without a budget to precisely screen every donation, they could home in on antigens known to be specific to certain populations. At first there were problems, when staff members were initially upset by this apparent division of blood by ethnicity. “We didn’t educate the staff,” says Dr. Westhoff, “to know that we weren’t segregating the blood just to be segregating. We were doing it to send all the African-American units to the sickle program children because they were doing much better with blood that came from this same ethnic group.”

Rose George is a British journalist whose books include “Nine Pints: A Journey Through the Money, Medicine, and Mysteries of Blood.”

Post
Fifty Years Onward ..."That Riot Finally Just Burnt Itself Out After Five Days, That Was All"
MORE...
POPULAR TAGS