The elite paper front-paged an illustrated article on Friday asserting that while MS-13 gangsters are well known machete murderers, President Trump’s campaign against the Salvadoran gang is “out of proportion with the threat.” 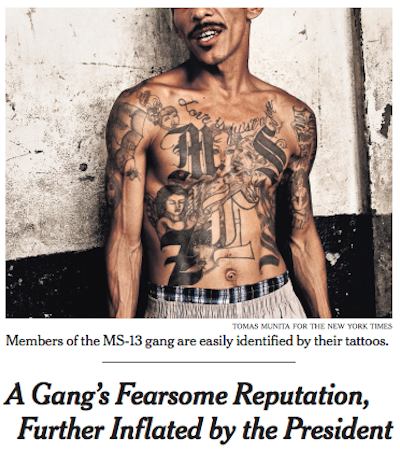 Apparently the article’s point is that MS-13 is not equally spread throughout the nation (fortunately!), which is certainly true. But if a dozen of the gangsters were to start attending the high school of the authors’ kids, the scribblers might have a different view of the problem.

Perhaps the writers missed the November 22 headline from the New York Post: Decapitated MS-13 victim stabbed 100 times, heart ripped out of chest. The crime is an example of how the gang gets its way through terror that often rivals the brutality of the jihadist world.

In MS-13-afflicted areas, kids may be afraid to go to school because of all the gang activity, and some of the murder victims have been students like Nisa Mickens and Kayla Cuevas, slaughtered by MS-13.

Wherever MS-13 members show up, there is death and terror in abundance, but Obama thought open borders to Central Americans would be great for the Democrats, so some number of gangsters joined the thousands headed north in 2014-16. And even though the New York Times says “Not all members of MS-13, or Mara Salvatrucha, are illegal immigrants,” the Center for Immigration Studies puts the number at 92 percent which is pretty close.

But President Trump is the problem because he sees MS-13 as a threat to public safety.

WASHINGTON — Early in his term, Attorney General Jeff Sessions instructed his top investigative deputies to target the transnational gang MS-13 as a priority. A year later, drug task forces have new powers to fight MS-13, more federal prosecutors are pursuing charges against the street gang with ties to El Salvador and foreign allies have been enlisted to capture its members.

Few dispute the violent menace that MS-13 is to pockets of communities across the United States. Its members yield machetes, kill with abandon and terrorize — for the most part — immigrant communities.

But law enforcement officials at local, state and federal levels describe the Trump administration’s hard-charging campaign against MS-13 as out of proportion with the threat.

President Trump has seized on the gang’s brutality and violence to symbolize the risks of illegal immigration.

Not all members of MS-13, or Mara Salvatrucha, are illegal immigrants. Nor does the gang survive on the global trafficking of drugs, guns or people.

Police and prosecutors in areas where MS-13 is most active said the heightened focus on the gang has come at the expense of fighting more widespread threats to the United States, particularly opioids and human trafficking.

At a meeting with Mr. Sessions last March, Chuck Rosenberg, then the acting head of the Drug Enforcement Administration, said it made little sense to focus on MS-13 over more dangerous organizations. He refused to commit more resources to combating the gang, according to two people familiar with the private meeting. Mr. Rosenberg has since left the Trump administration.

“MS-13 is certainly a threat, just not the one the president is making it out to be,” said Tom Manger, the police chief in Montgomery County, Md., a Washington suburb where the gang has one of its largest concentrations. Police there dealt with only four MS-13-related police incidents last year — but a total of five homicides — compared with zero in 2013.

“They are a local public safety threat, but they are not a national security threat,” Chief Manger said.