The concerned citizen has to watch closely for terror trials occurring in America because they often get minimal news coverage, just small notices on the day of conviction and sentencing if that. It’s easy to miss the pattern that there are a number of Muslims, usually immigrants, who plot to kill Americans here or aid our enemies abroad.

Today’s terror trial has an interesting backstory of multiple diversity: convicted perp Sabirhan Hasanoff was born in China of Uzbek parents who moved to Australia when he was a baby, later relocating in Brooklyn. After years of a successful career as an accountant, he decided that the Islam in his life needed to be ramped up to a more extreme expression by helping provide al Qaeda with money and equipment.

Another curious feature is how he was guilt-tripped into jihad by recruiters like the late Anwar al-Awlaki who convinced Hasanoff that it was wrong to live in infidel luxury when Muslims were suffering somewhere in the world.

Hasanoff certainly doesn’t conform to the popular view that jihad is caused by poverty. In fact, he shows that even apparently well assimilated Muslims in suits are not to be trusted. (He is somewhat similar in this regard to Faisal Shahzad, the failed Times Square bomber, who appeared to be a well integrated suburbanite with an MBA.)

Below, a courtroom sketch of Sabirhan Hasanoff with Judge Kimba Wood. (Remember Kimba Wood? In 1993, she was forced to withdraw from an appointment by President Bill Clinton to be Attorney General because she had hired an illegal alien nanny.) 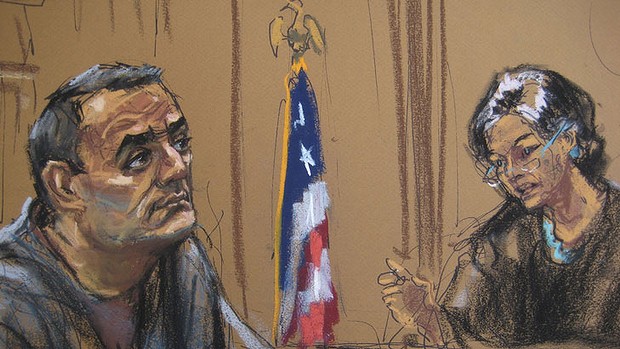 Adelaide-raised Sabirhan Hasanoff jailed in the US for 18 years for supporting al-Qaeda, The Australian, October 1, 2013

ON the surface it seemed like Adelaide-raised Sabirhan Hasanoff had it all – an US college education, a rewarding career family, travel and money.

Yesterday in Manhattan Federal Court he was sentenced to 18 years in prison after pleading guilty last year to supporting al-Qaeda with cash and supplies .

Prosecutors said Hasanoff, 37, provided extensive support to al-Qaeda from 2007 to 2010, even purchasing an advanced remote control for explosives attacks and reporting information about the New York Stock Exchange. They said he also made regular cash donations to people he thought were affiliated with al-Qaeda.

US District Judge Kimba Wood said the “most important factor” in deciding Hasanoff’s sentence was the need to deter others from similar conduct.

In a letter to the judge, Hasanoff expressed regret for abandoning his life in America, where he lived in Brooklyn with his wife and three children after graduating from Baruch College in Manhattan and obtaining a job as a senior manager at PricewaterhouseCoopers.

He was working as the chief financial officer for a large company based in Dubai when he was arrested in 2010 and brought to the US to face charges. “I made a good living and my family and I enjoyed a very comfortable lifestyle,” he wrote. “And then, for reasons that I still have trouble confronting, I threw that all away.”

Inspired by radical clerics, he said his desire to strengthen his Muslim faith and fight atrocities against Muslims were mixed with guilt about a life lived in comfort.

“I completely renounce any view of Islam that says that violent jihad is in any way acceptable,” he said.

During his sentencing, Hasanoff told the court : “I’m very sorry for my conduct. I should have known better, and I don’t have any excuses”.

Born in China to Uzbekistani parents, Hasanoff’s family, facing persecution in China just as they had in Uzbekistan, moved to Australia when he was a baby.

They settled in Adelaide, he assimilated with local school kids, soaked up the culture and lifestyle and became an Australian citizen.

As a teenager, his family packed up again and moved to Brooklyn, New York, where his parents ran a newsstand.

When the passenger jets flew into the World Trade Center buildings on September 11, 2001, and the daughter of a friend who worked in one of the towers was missing, Hasanoff embarked on a frantic search of Manhattan hospitals looking for her, discovering she was killed in the attack.

Prosecutors believed Hasanoff and a Brooklyn co-accused Wesam el-Hanafi, who is yet to be sentenced, became supportive of violent extremist Islamic causes in 2003.

Mr Hasanoff still has family here and in Melbourne. In June The Advertiser spoke to his South Australian cousin, who described him as “quite nice, a good family man – nothing out of the ordinary”.

A week later The Advertiser obtained his account of how he went from being nice and good to helping al-Qaeda.

In the letter to senior US judge, the Honourable Kimba Wood, he sounds remorseful, and says he realises “how terribly wrong” he was, and emphasises that he rejects violence and any interpretation of Islam that condones violent or terrorist acts.

“The fact that I stand to lose a significant portion of my adult years, my children’s growing up years, and the simple opportunity to participate in the affairs of a free society is my fault and my fault alone,” he writes. “I blame no one else.

“What I have done to the lives of those whom I love and those who love me is unspeakable and I am amazed they continue to stand by me.”

He told the judge that his people are Uighurs, an Islamic ethnic minority in China, and that in 1980, when he was three, he came to Australia with his immediate family – his extended family came over later. About 10 years later he moved to the US.

Later, he married and he and his wife had three children, while he made a good living working for accounting firms before throwing it all away. “Because of my stupidity I will miss many of my children’s milestones,” he wrote.

“I was not able to attend the funerals of my beloved grandfather and father-in-law. I have let down members of my family and have brought shame to my community.

“I cannot express to Your Honor how much I enjoyed, and how much pride I took, in simply being a father to my children and a loving husband and partner to my wife.

“To see them once every two weeks, for an hour, and to see the children growing up without me tears me apart. All the more so because I know whose fault that is.”

According to Mr Hasanoff he wanted to connect more with his Muslim faith, and at the same time felt guilty for his comfortable life, which made him want to stand up for fellow Muslims. Then there was the influence of radical clerics, and the people he wanted to show his commitment to by providing information about the New York Stock Exchange.

He finishes by saying he was “relieved” to have been arrested, before he ended up like someone who was killed fighting for the Muhajireen Brigade in Syria.

“I am so glad my actions never went that far,” he wrote.