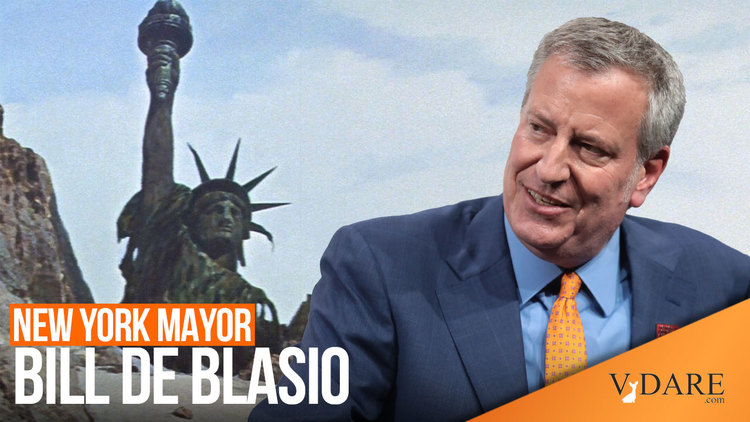 Earlier: Dallas Public Schools Will No Longer Suspend Students Because Too Few White Students Are Suspended

Regression to the black mean…

Mayor Bill de Blasio on Friday unveiled a plan to overhaul gifted and talented education in New York City elementary schools, calling for sweeping changes to a highly selective program that has been widely criticized for exacerbating segregation in the nation’s largest school system.

Under Mr. de Blasio’s plan — released when he has just three months left in office — elementary school students who are currently enrolled in gifted classes would become the final cohort in the existing program.

The system would be replaced by a program that offers the possibility of accelerated learning to students in the later years of elementary school. And the test given to kindergarten students to screen for the gifted program, already suspended in part because the city’s advisory school board refused to renew it last year, would be permanently ended.

“I bet you a lot of parents are going to look at this plan and say this is a reason to stay” in public schools, Mr. de Blasio said in a radio interview on Friday, adding that far more children would have the opportunity to receive some accelerated learning than under the existing system. But some families and elected officials who support keeping aspects of the current gifted system sharply disagreed.

Mr. de Blasio has been criticized for not taking forceful action to fulfill his promise of tackling inequality in public schools. The announcement comes just three months before he must leave office because of term limits, putting the fate of the plan in the hands of his successor. Mr. de Blasio, who is weighing a run for governor next year, has also said the plan could change as the city seeks comment from the public.

Eric Adams, the Democratic nominee for mayor and the prohibitive favorite to win next month’s election, has rejected calls to get rid of gifted classes, and has instead said he favors an expansion of the programs into low-income neighborhoods. Experts have said that plan would do little to integrate the programs without more direct changes to admissions.

“Eric will assess the plan and reserves his right to implement policies based on the needs of students and parents, should he become mayor,” said Evan Thies, a spokesman for Mr. Adams’s campaign. “Clearly the Department of Education must improve outcomes for children from lower-income areas.”

The mayor’s action attempts to address what the city has known for decades: Its gifted and talented program has contributed to racially segregated classrooms and schools for thousands of students citywide.Though about 70 percent of the roughly 1 million public school students in New York are Black and Latino, about 75 percent of the roughly 16,000 students in gifted elementary school classes are white or Asian American. For years, rising kindergarten students have gained access to the program via a high-stakes exam that some families pay tutors to help their children prepare for.

How dare white people (and Asians) populate the gifted elementary school classes, when 70 percent of the public school students are non-white!

Welcome to post-America America, where the standards once governing white America are entirely abandoned, because non-white America no longer represents America.