I hadn’t been following the story about the murder of  Corinna Mehiel (right) although I had taken note of how awful it was. They found her tied up in her basement, stabbed to death. She appeared to have been tortured. Another day, another white woman dead, for, seemingly, no good reason.

At the time of his arrest he was wanted on a charge of violating probation in a robbery conviction in Tennessee, and he has an extensive criminal record in Georgia with convictions for making a terrorist threat, assault and robbery. 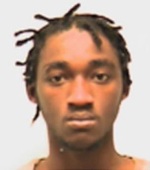 This raises the obvious question of why he wasn’t in jail where he belonged.

It turns out that Mehiel was a leftist social justice warrior. Colin Flaherty explained her at American Thinker:

Her Facebook page and blog are full of anger toward the white racism that she was convinced was causing so much violence towards innocent black people:

This year has been exciting and terrifying. So many tragedies inflicted on the full spectrum of non-white males in my country.

I have spent many days trying to understand this moment in our history. Feeling so proud of what we have all accomplished.

Sobbing with the country at the death of the young, beautiful people in Orlando. Crying to my father after watching Philando Castile pass in real time in front of the whole world.

His strong and beautiful girlfriend having the strength to show that story to an already grieving country.

And through it all watching the women in my life spend the year in worried apprehension.

Trying to be excited for the future, and all the while listening as others rallied around chants of hate and fear toward people of color, people of other religions, people of the lesser sex, people who don’t check one gender box.

Her belief in black victimization came, she said, at an early age when her mother read to her the book that would change her life: It Takes a Village, by Hillary Rodham Clinton.

Hillary’s book may have neglected to mention that black on white murder is wildly out of proportion: And how a black person is 27 times (at least) more likely to murder a white person than vice versa.

She was, in other words, a left-wing crackpot. And yet another leftist white woman who learned the truth about violent black men the hard way.

Flaherty observed that the war against whites continued in the days following Mehiel’s murder:

Down in Jacksonville, Florida, a white music teacher told a black man that she did not want to hire him to clean her yard. He killed her. For the music teacher and mother of four, it was her second time around the block: 23 years ago, another black intruder broke into the same house and almost killed her.

For the killer, it was his 33rd arrest.

A Jacksonville news station found her testimony at that trial and broadcast it.

In Tulsa, a 19-year-old white girl came home early for lunch and found a black person burglarizing her apartment. He killed her. Cops said the man they arrested for her murder was the chief suspect in two other murders, but they could not prove it.

That is cop talk for ‘this is his third murder, at least.’

In Milwaukee, a group of black people carjacked a white city inspector and killed him. The same mayor who has appointed himself one of the nation’s top preachers of the gospel of black victimization and white racism appeared before the TV cameras to wonder how this could have happened.

Not one reporter suggested the obvious: Violence and murder and denial is part of a pattern in Milwaukee and around the rest of the country. And he is part of the problem.

In Spring Lake, North Carolina, a white mother of two was found murdered outside her home. Her black boyfriend is under arrest.

In Cincinnati, a white man named Jamie Urton was driving through a black neighborhood when a black child darted in front of his car, striking it. The child was shaken, but okay. Urton died after three black people pulled him from the car, beat him, then shot him.

Neighbors say it happens all the time.