Netherlands Poll: Less Islam and Fewer Muslims Would Be an Improvement

Citizens of the Netherlands has been polled about how much they love their Muslim diversity and how much better the country is after being culturally enriched by immigration.

Oh wait, the Dutch don’t like having unpleasant hostile Muslims in their midst at all, according to a recent survey. The whole experience has been a disaster, from the assassination of Pim Fortuyn to the attacks on basic free speech by demanding Muslims.

We Americans should take the hint and end Muslim immigration on national security grounds before it’s too late.

Below, a diverse neighborhood in Amsterdam. 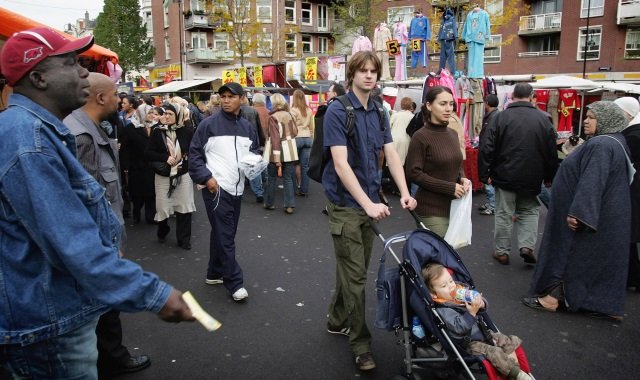 The Netherlands has enough of Islam. More than three quarters of the Dutch (77 percent) believe that Islam is no enrichment for our country. More than two-thirds – 68 percent – say that there is enough Islam in the Netherlands. It is striking that a majority of voters from all political parties (from PVV to VVD, CDA, D66, PvdA, SP and 50plus) share this view.

A poll conducted by the research bureau of Maurice de Hond (the Dutch equivalent of Gallup), commissioned by the PVV, among a representative sample of over 1,900 people also shows other striking results:

A majority of 55 percent favors stopping immigration from Islamic countries.

72 percent favor a constitutional ban on Sharia law in the Netherlands.

64 percent say that the arrival of immigrants from Islamic countries has not been beneficial to the Netherlands.

Nearly three-quarters – 73 percent – of all Dutch see a relationship between Islam and the recent terror acts in Boston, London and Paris.

PVV leader Geert Wilders: “The results are very clear. The Netherlands has had enough of Islam. The majority do not want new immigrants from Islamic countries, nor any new mosques. They think that Islam is no enrichment for the Netherlands and say: Enough is enough. I will confront the Dutch government with these findings and demand that we finally stop the Islamisation of the Netherlands. For a long time is has been claimed that anti-Islamic opinions are extremist. It is clear now that they a majority of our people supports them!”