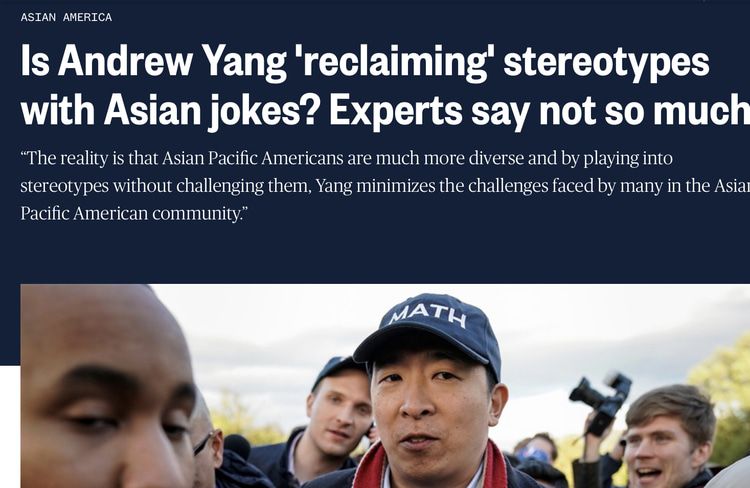 NBC: Andrew Yang's Self-Deprecating Sense of Humor Is NOT Funny According to Trained Comedy Grievance Experts

Is Andrew Yang ‘reclaiming’ stereotypes with Asian jokes? Experts say not so much.

As 10 Democratic candidates take the stage Wednesday for the fifth Democratic presidential debate, many Asian Americans are keeping their eyes on Andrew Yang, and not solely because of his proposal for universal basic income or his increasing momentum in the race.

Many will be on alert for another Asian joke from Yang, as his representation of Asian Americans remains a source of division within the community.

From his campaign slogan “Make America Think Harder,” also referred to as MATH, to his quip on the debate stage about knowing a lot of doctors because he’s Asian, the Taiwanese American candidate has ignited criticisms that his Asian jokes just perpetuate tired “model minority” stereotypes.

In an October interview with the Washington Post, Yang argued that most Americans are “very, very smart and if I make a joke that I’m an Asian guy that likes math, they don’t think, ‘Oh, all Asians like math.’” He further rationalized his self-deprecating humor in the same interview by claiming that “by bringing these stereotypes into the light and poking fun at them, you’re actually dispelling them and making them weaker.”

Many experts, however, aren’t so sure. … But sociologists and other academics said that the candidate’s jokes aren’t doing the Asian American community any favors.

and how this is going to reinforce a one-dimensional picture of who Asian Americans are,” sociologist Anthony Ocampo, who focuses on race, immigration and LGBTQ issues, said.

While Yang’s comments are in jest, feeding into the model minority myth has damaging effects on the Asian American community and beyond, Ocampo said. For Asian Americans, the stereotype creates an environment in which they feel pressured to adhere to standards of academic perfection, and Yang’s jokes could send the harmful message that “the only way they’ll be able to be heard is if they are willing to play off the model minority stereotypes,” he said.

According to the Pew Research Center, Asian Americans have the largest income gap compared to all other groups. In New York City, they have the highest poverty rate compared to other racial groups with certain Asian subgroups, like the Bangladeshi community, that experience particularly alarming rates. However, over a 13-year period — between 2002 to 2014 — they received only 1.4 percent of the city’s social service funds. Advocates cite the model minority myth and the perception that Asian Americans are financially well-off as a key reason for the insufficient funding.

Anyway, this article goes on in this super serious vein for quite some time. I couldn’t take any more of it, but you might find the sheer humorless repetition pretty funny in a brain-drubbing sort of way.