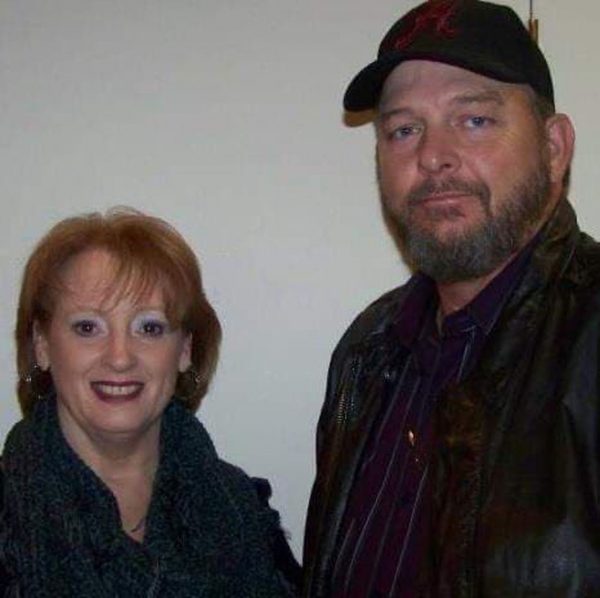 Three white people are dead, murdered by a black male during a two-day rampage in Alabama. What started in Auburn, Alabama ended in Birmingham. The black suspect (he also had a black female accomplice) started his carnage in Auburn before being apprehended in Birmingham. Before the police detained him, a white couple was dead in a home invasion in a city between Auburn and Birmingham.

Her name is Nancy Nash.

His name is Willie Tidwell.

Her name is Barbara Tidwell.

Outside of East Alabama, there is virtually no news of this atrocity. There is no coverage of what happened to Nancy Nash or Barbara and Willie Tidwell. They were murdered by a black male engaged in a Natural Born Killers-style crime spree.

The problem? Nancy Nash, Barbara and Willie Tidwell (the latter two pictured right) were white, their murderer a black male. This isn’t the racial equation necessary for a Deep South murder spree to necessitate national press coverage, or even regional coverage. White lives, even in a geographic area universally reviled for purported "white supremacy," don’t matter.

Suspect in 4 murders stretching from Auburn to Birmingham surrenders after manhunt, Al.com, April 19, 2020

A massive manhunt Saturday in Birmingham ended after a man suspected in at least four murders stretching from Auburn to Birmingham surrendered in his boxers and socks.

The suspect has been identified by Auburn Police as 32-year-old Derrick Hightower of Columbus, Ga. He was taken by ambulance with a gunshot wound to the arm, presumably suffered when he exchanged gunfire with police. Those on the scene when he surrendered said Hightower appeared tired after more than 24 hours on the run and ready to turn himself in. A second person of interest is also being questioned as she had been with the suspect at some point during the night. 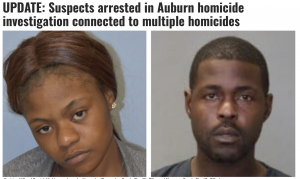 Auburn police have charged Hightower with capital murder and first-degree theft of property in connection with the death of a Smiths Station woman that happened early Friday. They said they have also charged Kentrice Symonee Hill, a 21-year-old Birmingham woman, with first-degree theft of property in the case as well. Police said they will extradite the pair to Lee County.

The ordeal began Friday morning with the shooting death of a 54-year-old Smiths Station woman, continued along U.S. 280 to Dadeville where a couple in their 60s was shot to death and continued to escalate Saturday morning with a home invasion and another homicide, followed by a shootout between the suspect and Birmingham police.

No police were injured in the gunfire and the suspect managed to escape. Blood at the scene indicated he was wounded.

Birmingham police, along with other law enforcement agencies and their federal partners, set up a massive police dragnet along Crestwood Boulevard. The search included tracking dogs, SWAT and Jefferson County’s Star 1 helicopter.

If all the crimes are indeed proven to be linked – and police strongly believe they are – the rampage began close to sunrise in Auburn on Friday. Auburn police responded to the Farmville Volunteer Fire Department’s call for assistance on a vehicle fire in the 9500 block of U.S. Highway 280 West around 6 a.m. Friday. When officers arrived, they found a white 2005 Chevrolet Silverado truck on fire and 54-year-old Nancy Nash of Smiths Station dead nearby at Creative Habitats Landscaping.

Nash worked at the landscaping business and is believed to have been killed while possibly interrupting a burglary. Her vehicle, a black 2019 Nissan Frontier, was discovered missing and later located in Irondale. That case is being investigated by Auburn police, the state Fire Marshall’s Office, the state Medical Examiner Office and the Lee County Coroner’s Office.

Next, the suspect is believed to have been involved in the double murder of a couple in Dadeville Friday evening. Dadeville Police Chief Johnathan Floyd said the husband and wife were found slain in their home in a possible robbery. Floyd identified the victims on Saturday as Willie Tidwell, 61, and his wife Barbara, 65. Floyd said they were communicating with Birmingham investigators.

In Birmingham, Mauldin said officers were notified about 11 p.m. Friday that a vehicle being sought out of Auburn was spotted at the USA Economy Lodge on Crestwood Boulevard. That vehicle, Mauldin said, was taken in Auburn and involved in the homicide there.

Early Saturday morning, as police continued their search, evidence led them to a home in the 100 block of Briar Grove Drive. A resident in the area was letting his dogs out in the backyard to use the restroom when a black male wearing all black appeared seemingly out of nowhere and said, “Hey, you got a phone?” the resident told AL.com, asking that his name not be used for fear of retribution.

Her name is Nancy Nash.

His name is Willie Tidwell.

Her name is Barbara Tidwell.

These were white people murdered by a black male during a two-day crime/murder spree in East Alabama.

Few outside of Auburn or Dadeville will read of this story, or what transpired during a long, terrible two-day period in April 2020.

But they are worth remembering. Their Lives Matter Too.